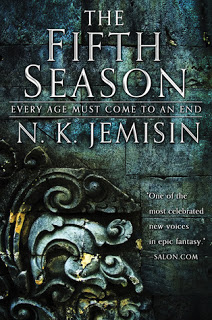 The first book in the Broken Earth series, The Fifth Season is a good book. I liked the world building, the characters, even if there are so few of them and grabbing all the action in the story, and I am going to read the second book in the series, The Obelisk Gate, next.

The story is mostly a setup for the series, where the main characters are introduced and the world is built. As a far into the future post apocalyptic Earth, it is a mixture of old dead civilization influences and pure human survival. That is why some words that are particular to our culture stick out when used and N.K. Jemisin does slip a few in there, although not enough to be annoying. The book is split into three view points: the basically orphaned Damaya, the talented Syenite fast climbing in the ranks of the Fulcrum orrogenes and the old rogga Essun, walking a damaged landscape in order to find her husband... and kill him. The Essun point of view is written in second person, which may be off putting for a while, but one get used in time.

There isn't much else I can say without spoiling the story. The feeling at the end of the book is clearly not one of closure and catharsis, as it ends abruptly and you realize it is just the first part of a larger tale. While I can't say I was awed by the content or the writing style, they are both solid and professional. The book captivated me and I will be continuing to read the story, mostly to see where it goes.