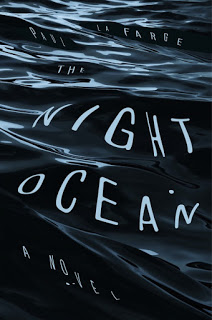 It is tough reviewing a book like The Night Ocean because it is about so many things and at the same time about nothing much. Paul la Farge describes the experiences of a female psychotherapist who is married to a man obsessed by a book about the sex life of another writer (H.P.Lovecraft) so much that he follows leads, writes a book himself, based on the memories of a man who in the end turns out to be something different than anybody thought. So it's a book about a book about a book about books, basically, only written through the eyes of the people writing and being affected by said books.

Half of me screams in rage against the book, now that I have finished it, because it wanted some science fiction, some lovecraftian horror, some fanciful escape from reality. But the other half laughs, because no other book in recent memory is more about escape from reality and lovecraftian horror and even science fiction. Only not in the way I expected. It is so difficult to talk about the book because even minor details might spoil the experience. I can ruin your reading within a mere sentence, so I will try to talk about my personal feelings about the book, rather than its contents.

The writing is good. It is filled with details that pull you in into the places it describes. Sometimes it gets a little too much, I caught myself several times asking why is that detail there, what the hell does it have to do with the story. Well, let me guide you on how to read this book: there is no story. There is no cathartic ending that explains all. Instead the journey is the important part and instead of complaining about specifics, you should cherish them as you would a good meal. Since I am a fast eater, especially if the food is good, I can only advise you to do as I say, not as I did.

The subjects the book touches are many and La Farge spent a lot of time documenting them. It goes through homosexuality before and after the war, differences between Canadians and Americans, American paranoia against communism, the world of writers - science fiction in particular, but also various types of academics, German concentration camps, antisemitism in the U.S., history of the world and so on and so on. In a strange case of congruence, there is a scene in the book that is almost identical to one from a previously read book (Arkwright), with a science fiction convention in New York 1939, where a rebellious and revolutionary group of writers are not permitted to spread their particular views in the convention so they leave and form their own group.

Bottom line: while the subject itself felt unimportant and a bit boring, the writing and the world and character building kept me reading. It is not the type of book I usually read, but I can recognize a good book even if I don't particularly like it. And this is The Night Ocean for me, a great book about people that I should have not cared about, but the writer forced me to.