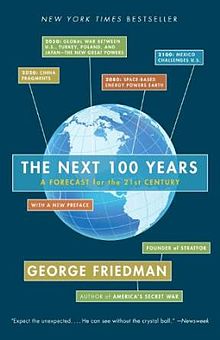 This short but compact book is about all the stuff that I am really weak on: geography, history, politics and economics. Yeah, like everything remotely related to the real world. Yet I actually liked it a lot, especially the first half. In The Next 100 Years, George Friedman submits his thesis that geopolitics is what shapes history and that countries are pretty much locked in patterns that they cannot escape. Using this theory, he attempts to predict events in the twenty first century. While he starts with comparing historical expectations and predictions with reality twenty years later and finding they are completely different, the author concludes that some things factor too heavily in the long run to not predictably shape the direction of history.

What I liked about the book was how easily, cynically and depressingly he describes the underlying reasons for stuff that has happened, things that are published and marketed as triumphs of humanity or struggles of heroes and that, really, were quite unavoidable. An example is female emancipation. As having 8 children per family (which was the norm in the 19th century!) became unprofitable - as children were less needed as unskilled labor and getting them to school to give them skills was expensive - and as child mortality fell and as life expectancy grew, families started having fewer children. That meant a woman would not have to dedicate her life to breeding and raising children. With that much extra time, it became unavoidable that they would do something with it. Same root for changes in family structure, violent splits between conservatives and progressives and the contraction of religious power, which is trapped in defending unsustainable societal models, like keeping women as household administrators.

Same thing about the way countries react, why the U.S.A. became the global power that will shape this century and how the actions of the great actors in global politics, sometimes appearing as chaotic or insane, are very clear and even predictable once one determines the real goal behind those actions. As the leading global power, the United States of America doesn't need to win any wars, for example, just keep the other major players locked in situations of local crisis. Ending terrorism or bringing peace and stability all over the globe, while declared as the goals of international policy, are against American interests.

I was saying that I enjoyed the first half of the book more, because it was more theoretical and more broad. Some interesting predictions there, such as Turkey, Poland and Mexico becoming important actors in the political conflicts in this century. The second half goes into economics and becomes really American centric, using concepts that are only familiar to one that lives in that economy. Yet it describes some interesting dynamics, such as predicting that in the 2030s immigration will not only not be a problem anymore, but something leading nations will compete for, as working population decreases.

I can't possibly comment on the veracity of the book's predictions or on the validity of the author's methods, as I am a complete noob in any of the fields required to analyse this book. I can tell you that Friedman expected much more to have happened in the late 2010s than it actually happened. Also, I did a quick google search to look for opinions and I will detail them below. Yet first I will summarize the book as I see it.

Friedman asserts that the US will be the pivot around which all history will revolve in the twenty first century. It had the largest military force, it controls both oceans with its powerful navy, effectively dictating who can or cannot use it to transfer resources, and even if a heavy importer of resources, it had enough of its own. Moreover, its territory is unassailable by land. Other players will attempt to balance that power, such as the European Union, Russia, the Muslim nations or the South Asian nations, while the US will actively work to destabilize them so that they never get there. Europe is pretty much over, though, decadent and divided. China will fail economically, then split into regional powers easily manipulated against Chinese stability. Also, constrained by history and culture, Japan, China, Korea will never be able to effectively work together to create a regional power stable and strong enough to balance the US. The only country that can do anything to rally Muslim countries around it is Turkey, the rest just fight among themselves and whenever one manages anything, America pulls the carpet from under its feet. Yet Turkey is a secular country so far and even with the strong hand of Erdogan it will never convince countries that are essentially religious barbarians. Last and most important, Russia, which will also fail because it relies too much on its hydrocarbon exports, something that the US will subvert by investing heavily in alternative energy sources and is surrounded by countries that will never fully come under Moscow control, with the US always encouraging the opposite. He then asserts that by 2080 Mexico will emerge as a competitor to the US.

Many of the comments online mention the shock value of dismissing European or Chinese importance in the world in the long term. Personally I feel that if the US will be such a comfortable global power, the world is going to be boring at the very best and probably really sad. Friedman himself wrote another book two years later called The Next Decade: What the World Will Look Like, in which he expresses his fear that so much power will corrupt the very foundation of the nation and turn republic into empire. Many feel that this century is so much different than any other and cannot be accurately predicted by looking back to history. "break it or make it" century, they call it. Let's hope it's the latter.

Other criticism goes towards the singular focus of the book on geopolitics and less on economics, technology, religion or culture. I believe he did that for shock value, also, trying to pull people into the discussion by underestimating or even completely ignoring things with so much emotional value for a lot of people. He basically said "the world works like this, not like you would like it to work, deal!", then waited for the comments. A bit trollish, Friedman is.

Finally, the more military oriented criticize Friedman for relying too much on conventional military paradigms and ignoring space warfare, WMDs and the informational angle. I can only consider this as a stabilizing force, rather than a destructive one. If the possibility that a pissed off enough player might destroy the whole board exists, then the actions of all the players will be more subdued than possible. Warfare was made more subtle, not more unpredictable, by this type of possibility.

Bottom line: an eye opening book, more valuable for its concise analysis of global history than its predictions, probably, and for explaining why so many countries behave like idiots. In the end, the very purpose of the book, that of predicting this century, is made moot by its thesis that it can be predicted. If that is so, then whatever happens happens no matter what anyone does. Also, I believe it is great material for fiction writers that want to ground their universes into reality. While the predictions themselves, either wrong or spot on, are irrelevant, the method for their creation is most interesting and worth investigating. I mean, George Friedman is not Hari Seldon, but he is the closest we've got.

George Friedman has a lot of video talks and interviews detailing his views. Once can easily look them up online.