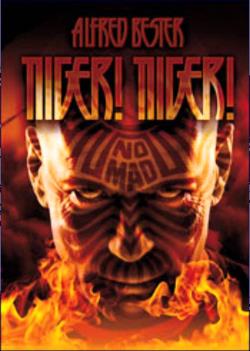 In the first pages of the book I hear about a man who discovered teleportation when he was about to die. Like telepathy, it was a mental thing and most people seemed to be capable of it for short distances. I immediately thought it was quaint and that I was going to read one of those hopelessly out of date books. Indeed, published in 1955, the book didn't age well in terms of social or technological depiction, but it was really entertaining.

First of all, with all of its flaws, this book isn't boring. Alfred Bester managed to create a true antihero as the protagonist and maintained it as far as close to the end of the book. In The Stars My Destination (also known as Tiger! Tiger!) the hero is a brute who has no ambition, no desire for improvement, content only to exist. When left for dead on a derelict space rocket, his survival instinct leads him to obsessive hate towards the ship that didn't save him and his whole life turns to revenge against it. Imagine The Count of Monte Cristo in space, where everybody can teleport at will. And he is hardcore. The first thing he does when he gets back is train his teleportation powers and, when discovered by a negro woman (in '55 it was an OK word), he blackmails her with knowledge of her family and promptly rapes her. Yup, that's the hero.

The story gets a little bit inconsistent afterwards, as this low life unambitious person suddenly is capable of immense personal change, in behavior, knowledge and social status. However to follow his mad maniacal hunt for the thing that offended him is hallucinating. The world depicted by Bester is a quasifeudal multiplanetary society led by dynasties named after the successful brands at the time, like Kodak (yeah, I know) and devoid of any social justice or human empathy. In fact, when describing the emergence of teleportation, the immediate effects he predicts are diseases spreading through the world, carried by vagrants and immigrants who just teleport out of poor and backward countries in the civilized world (I told you the book has not aged well). Yet for all of this it is a mesmerizing world.

As the book was short, I finished it in a few hours, there is no reason not to delve into something that is both incredibly quaint and amazingly refreshing. While the ending felt a bit too inconsistent with the beginning, the story was interesting and I loved the flawed and brutal character, something I doubt you will see in any mainstream story today. Like its protagonist, it is one of those works that I couldn't not like, despite their many flaws.