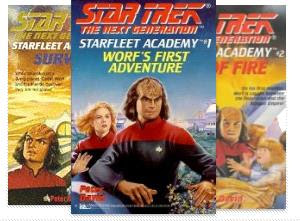 I've decided to read some of the stuff that takes place in the Star Trek universe, for research purposes. I was particularly interested in Starfleet Academy and, since Next Generation was clearly the best Star Trek series yet, I went with that one. So here I am reviewing the first three in a fourteen book series called Star Trek The Next Generation: Starfleet Academy Book Series, all written by Peter David. And, boy, am I disappointed!

It's not that I expected some high end drama, but in reality each one of these books is a booklet that one can read in about 2 hours. All three of them together are barely a novel. And the thing is that this is exactly what I was looking for: a history of the crew of the Enterprise from when they were cadets. What am I disappointed for? It is a "written by numbers" book. It is one of those "write a novel in nine days" thing, only each is probably written in five. The characters are shallow, undeveloped, details are missing and there is no real science fiction in there. I mean the real stuff, the one that takes into account centuries of cultural and technological evolution in which we had eugenic wars and a third World War, in which we encountered a myriad of alien species that are very different from us. There is no social commentary, no psychological evolution, no high technology and no real personal drama. And I understand. Just take a look at the bibliography of Peter David, it needs its own page. The man is a writing monster. However, it is clearly a quantity vs quality thing.

Anyway, I will review all three books as a single story, which in fact it is. All about Worf at the Academy, Worf's First Adventure is about proving himself in a simulated battle against the Romulans, while Line of Fire and Survival are about him taking command of a diplomatic mission on a joint Federation-Klingon colony.

From the first pages we get that Worf has a conflicted personality, stuck somewhere between the strict tenets of the Klingon culture and the Human education from his parents, unclear if he is more Klingon or more Human. His parents are proud of him and his adoptive brother as they embark for the Starfleet Academy, but from then on, for three "books" of adventure, we don't hear anything about those parents anymore. In fact, the first book is there merely to prove Worf's superiority over his human brother who is forced to leave the Academy as soon as the story ends. Afterward, we don't read anything about him, either. There are more pages dedicated to grumpy and violent behavior than it is to what the Academy entails, what are the courses, or how disjointed lectures can form a cadet into an officer in a four year standard program. It is not explained why some are engineers and some are in security, even when they are taking the same classes. Nor is it made obvious how the teaching methods in the twentyfourth century differ from the ones in 1980. Worf simply floats from one sequence to the other, like in a dream, without the need for continuity or context or even common sense.

To summarize: Worf comes to the Academy, learns nothing new and his innate values and abilities help him go through the challenges posed by a Starfleet training. I mean, really, there is a part there about how Worf was taught to be in a certain way and not helping a team member when in need was simply not conceivable. So basically... he remains unchanged. True, Worf is one of the most stubborn and difficult to change characters in Star Trek, but still, a good story needs some sort of development, some sort of life changing challenge, any kind of challenge at all.

In truth, this level of writing makes me more confident on my prospects of writing books myself, but I don't want to read stuff like this.