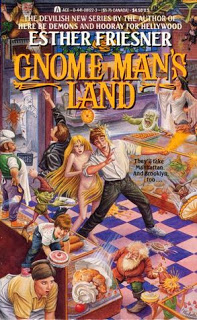 This is the third writing of Esther Friesner that I've read, after The Shunned Trailer and Druid's Blood, both excellent and funny, combining fantasy elements with the present or other realistic historical settings. Gnome Man's Land does the same thing, but I have to say I didn't find it as funny or as good as the others I mentioned. I also attempted to start Here Be Demons, another of her books, but couldn't really enjoy it enough to go past the first chapter. Probably she is one of those authors who, when they are good are really good and when they are not, well...

The book is the first of a trilogy starring Tim Desmond, a young boy of Irish descent who finds himself in a strange situation when the veil between our world and the land of the fey is punctured and more and more fantastic creatures go through. They come and attach themselves to mortals, as many of them are creatures who's very reason for existing is serving their masters. Stuff like banshees, Mongolian ancestors, goblins, kobolds, Greek demigodesses, Russian bath spirits, sprites, elves and so on and so on just sprout from the rupture, bringing annoyance and confusion more than anything. Tim somehow gets tricked into becoming the champion of the Fey on Earth and he does the job mainly because he feels all of these supernatural creatures need his help (plus the girl he secretly loves supports this and his banshee is a hot redhead to boot).

Some hilarity ensues, but often feeling a bit artificial, while the actions of the characters involved are simplistic, inconsistent and dragging on, like the author wanted to tell a joke and she ended up writing an entire book. The crises are not that good either, oscillating between childishly funny and dead bloody serious. The ending was disappointing as well, leaving a very traumatic event just in the wind, like an afterthought, pending Tim's recovery of some of his memory. I really wanted to like the book, too, but in the end I just forced myself to reach the end and I am confident I will not read the other two books in the series. I have some hopes for the Princesses series, which I understand is one of Friesner's better works.