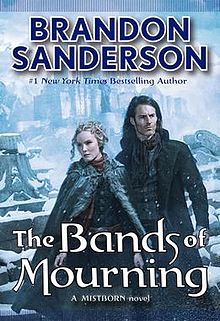 The unthinkable happened and I couldn't finish a Brandon Sanderson book. True, I had no idea The Bands of Mourning was the sixth in a series, but when I found out I thought it was a good idea to read it and see if it was worth it reading the whole Mistborn series, for which Sanderson is mostly known. Well, if the other books in the series are like this one, it's kind of boring.

I didn't feel like the book was bad, don't get me wrong, it was just... painfully average. Apparently in the Mistborn universe there are people that have abilities, like super powers, and other that have even stronger powers, but use metal as fuel. Different metals give different powers. That was intriguing, I bought the premise, I wanted to see it used in an interesting way. Instead I get a main character that is also a lord and a policeman, who is solving crime with the help of a funny sidekick at the request of the gods, who are only people who have ascended into godhood, rather than the creators of the entire universe. The crime fighting lord kind of soured the whole deal for me, but I was ready to see more and get into the mood of things. I couldn't. Apparently, the only way people have thought to fight people who can affect metal is aluminium bullets, which is terribly expensive, or complex devices that nullify their power. Apparently bows and arrows or wooden bullets are beyond their imagination.

But the worst sin of the book, other than kind of recycling old ideas and having people behave stupidly is having completely unsympathetic characters. I probably would have been invested more if I would have read the first five books of the series first, but as it is, I thought all of the main characters were artificially weird, annoying and uninteresting.

Bottom line: around halfway into the book, which is short by Sanderson standards anyway, I gave up. There are so many books in the world, I certainly don't need to read this one. The Wikipedia article for the book says: Sanderson wrote the first third of Shadows of Self between revisions of A Memory of Light. However, after returning to the book in 2014 Sanderson found it difficult to get back into writing it again. To refresh himself on the world and characters, Sanderson decided to write its sequel Bands of Mourning first and at the end of 2014 he turned both novels in to his publisher. So the author was probably distracted when he wrote this book, perhaps the others are better, but as such I find it difficult to motivate myself to try reading them.