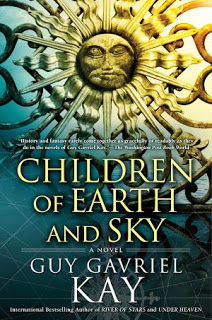 The only fantastical element in this book, except for a ghost that makes a short appearance, is a change in location. The rest is historical fiction in some place that feels exactly like Renaissance Europe, only it has another name and other gods. Worst than that, the story is boring and the writing mediocre. I couldn't finish it.

The story in Children of Earth and Sky follows a few chosen characters while they navigate the treacherous waters lying between warring (and spying) nations. I mean this both metaphorically and literally, since it is also about ships crossing the sea. Guy Gavriel Kay has been writing published works since 1984 which is why I was surprised to see such an amateurish writing style. He uses several tools again and again and again, without much effect. The worse, for me, was describing the same scene from different viewpoints, one after another, even if it did nothing to enrich the story or develop characters. Another is a certain repetition of a phrase for emphasis, something like "He didn't like the book. He didn't." OK, emphasized enough! Also I felt that the author coddled his characters too much. Instead of making them suffer in interesting situations, he just lets them off easy with crises that they can easily handle or at least manage with heroic skill. In one of the most important scenes, one of a battle, he kills off a major character, at which point I was thinking "OK, it's getting started", only to resurrect them immediately after. Ugh!

So beside being a boring historical drama (I mean boring even for a historical drama!), it really nagged me that it was marketed as fantasy. Maybe I am just getting fed up, considering I've just read a western and a heist story, both included in the fantasy and sci-fi genre because they happened in the future or in spaaaaaace. Bottom line: I can't in good conscience recommend this book and I am quite amazed that it has such a high rating.