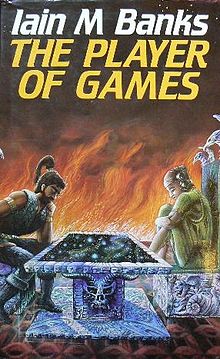 I'll be honest, I only started reading the Culture series because Elon Musk named his rockets after ships in the books; and I started with The Player of Games, because the first book was in an inconvenient ebook format. So here I was, posed to be amazed by the wonderful and famous universe created by Iain M. Banks. And it completely bored me.

The book is written in a style reminiscent of Asimov, but even older feeling, even if it was published in 1997. My mind made the connection with We, by Zamyiatin, which was published in 1921. Characters are not really developed, they are described in few details that pertain to the subject of the story. They then act and talk, occasionally the book revealing some things that seemed smart to the author when he wrote it. Secondary characters have it even worse, with the most extensively (and uselessly) cared for attribute being a long name composed of various meaningless words. The hero of the story is named Chiark-Gevantsa Jernau Morat Gurgeh dam Hassease, for example, and the sentient drone that accompanies him is Trebel Flere-Imsaho Ephandra Lorgin Estral. Does anyone care? Nope.

But wait, Asimov wrote some brilliant books, didn't he? Maybe the style is a bit off, but the world and the idea behind the story must be great, if everybody acclaims the Culture series. Nope, again. The universe is amazingly conservative, with the important actors being either humanoid or machine, and acting as if of similar intellect. The entire premise of the book is that a human is participating in a game contest with aliens, and even engages in sexual flirting and encounters with them, which felt really uninspired and even insipid. I mean, compare this with other books released in 1997, like The Neutronium Alchemist (The Night's Dawn Trilogy, #2) by Peter F. Hamilton or 3001: The Final Odyssey (Space Odyssey, #4), by Arthur C. Clarke or even Slant, by Greg Bear. Compared to these The Player of Games feels antiquated, bland. Imagine an entire book about Data fighting Sirna Kolrami in a game of Stratagema. Boring.

Perhaps the most intriguing part of the book is also the least explored: the social and moral landscape of the Culture, a multispecies conglomerate that seems to have grown above the need for stringent laws or moral rules. Since everybody can change their chemistry and body shape and have enough resources to have no need for money, they do whatever they please when they please it, as long as it doesn't disturb others too much. Now this threshold is never explained in more words than a few paragraphs. The anarchistic nature of the post scarcity society Banks described, and indeed the rest of the book, felt like a stab of our current hierarchical and rule based order, but it was a weak stab, a near miss, a mere tickle that went ignored.

Bottom line: my expectations for well renowned books may be unreasonable high, and maybe if I would have read The Game Player when I was a kid, I would have liked it. However, I wasn't a kid in 1997 and I chose to read it now, when it feels even more obsolete and bland.