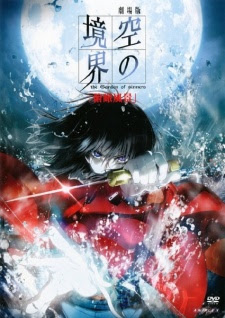 Kara no Kyōkai, translated in English as Garden of Sinners, but literally as Boundary/Border of Emptiness, is a strange little series of seven Japanese anime films. The lead is a girl who has a double personality, conveniently both named Shiki, but written with a different Japanese character. One of the personalities likes to kill people brutally, while the other is afraid of human contact. Enter Kokutou, a guy in the same class as Shiki, who falls in love with her and accepts her as being split like this and even covers some of her murders as he, after all, is in love with the one personality that does not kill.

Now, this is the least weird bit of the films. This story that I have been telling you is not told as linearly as I present it, but starts from the middle, then shows what happened in the past and future by flashbacks, prequel movies, and something that I can only call experimental movies, since they show scenes from what actually happens, but not in their normal order.

You see, after Kokutou starts camping outside Shiki's house to stop her from killing anyone, she attempts to murder him, only she can't and attempts suicide by throwing herself in front of a car. Only the murderous personality actually dies and when she awakens from a two year coma, Shiki has the Mystical Eyes of Death Perception, which see the seams that bind things to existence. Once you cut those, the thing dies.

In order to make her understand and control her condition another chick appears, one that is a magus. Yes, magic! I told you it was going to get weird. In the end, these three characters form a sort of private investigator agency that often deals with the supernatural and rogue magi.

All in all, the animation is rather good, the characters weird, most of them displaying some sort of emotional detachment bordering on psychopathy, but the story leaves a lot to be desired. just like the erratic order of the films, the story also jumps violently from brutal murders, criminal investigations, magic, philosophy and romance, making a mess of it all. It's not that i did not enjoy watching the films, but at the end of the seventh, when Shiki says "this is the end of my story" I couldn't actually feel it was any end at all. Perhaps the manga makes more sense, but as such, I can't really recommend watching it.