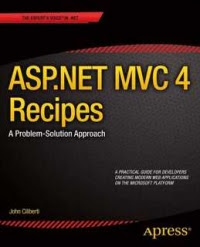 When I first opened the ASP.NET MVC 4 Recipes, by John Ciliberti I was amazed. It seemed to transcend the reference book and go into a sort of interactive path thing. You know interactive books, where you read the book and at certain points you get to choose what the characters do by going to read one page or another? This is what Recipes seemed to be. You get to a point where the author tells you which chapters to read and in which order based on your role in the organization. That is and will remain a wonderful concept and I would see more books steal it for themselves. However, the actual content of the book did not feel as great as its presentation, I am afraid to say. This is not to mean it is a bad book, only that I expected a lot more from it from reading its "mission statement". The book is Microsoft centric, obviously, but it says very clear that it will solve problems with Microsoft products as a rule. For example it favours KnockoutJS as a JavaScript framework. But that's not really annoying, though.

I think what bothered me most was that the content was all over the place. There are some chapters in which there are specific problems. The problem is described, then the solution is provided. Very nice. But then there are some problems that are vague and general with a very specific solution, lending a lot of lines to some issues and moving past others in a hurry. Of course, I would have liked all of the problems to have their own book and that was impossible, but the compromise here did not feel as great; I thought some of the problems were not really something someone would have more than once, and sometimes never, so using the book as a reference helps only so much. Some examples of problems to be solved: You would like to begin working with ASP.NET MVC Framework, but you do not understand the MVC pattern and why it is beneficial. - why would you start reading an ASP.Net MVC book if you don't even understand the MVC pattern? You would google something first. Or: You have started using the new .NET asynchronous programming pattern and love its relative simplicity compared to other programming models. However, you would like to have a better understanding of the code generated by the compiler so that you can improve the designs of your asynchronous methods. So you jump from not knowing what MVC is to wanting to read IL. Maybe I am just mean, but it soon turned into a very hard to read book from jumping from one issue to another like that, from level to level. Not to mention some "loaded" problems that have a description several lines long in the form of "you have found that your company strategy sucks, because of 1,2 and 3, and you want 4,5 and 6 because 7,8 and 9". It doesn't sound like my problem at all :)

Bottom line: I have not started working with ASP.Net MVC, yet, nor do I believe that my first job with it would be as an architect, so I will have an opinion on how it works in real life in a few months, probably. The book seems useful now, but not the ASP.Net MVC start to end tutorial that I wanted when I started reading it, and maybe that is why I had such a critical eye for it.