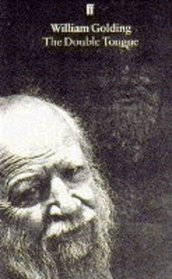 I've reviewed two books of William Golding already and both of them were complex analyses of the human nature. This little novel, The Double Tongue, is similar in complexity. A note at the beginning of the text is explaining perhaps best why Golding's books are so great in details. You see, the novel was published posthumously, after a draft of it was found in Golding's belongings. He has already finished the book once, wrote another version and had started on another draft. No wonder his books were so reflective and self referential and connected to so many other works of literature or philosophy.

About the content, it is rather interesting, as it details the story of a girl in ancient Greece, just before Romans started dominating the country, who becomes the Delphi Pythia. The story quickly goes to the decorative role a "well bred" female would have had in those days, carefully instructed how not to draw attention, kept in total ignorance, all for the moment when she would be offered to a husband. After attempting escape from this fate, the only option her father has to "do with her" is to give her to a priest of Delphi called Ionides. Thinking she was going to become a servant of the temple, sweeping floors, she becomes the oracle. This is used to analyse concepts as religious sentiment, political use of faith and to describe the parallel system used in this world of superstition and showbiz.

I thought that it was a really short story. Told from the point of view of an octogenarian woman, it dwells on the adolescence, the initial shock of coming to Delphi, but very quickly skips entire decades to bring the conclusion. The title is relating to both the Python that the god Apollo killed in the Delphi cave, which gave him the forked tongue that said two things at once, but also to the double system of religious ecstasy backed by very real intelligence networks and the duplicity of people who either declare themselves religious while lacking the sentiment or the other way around . The story is inspired by Ion of Euripides and the ending is revealing only to a select few who understand the reference to a passage of the Bible (see here and here).

I can say that I liked the novel. It wasn't a "wow" thing like in the case of Lord of the Flies, nor did it cause me to feel more enlightened with the final reveal. Being that short and the last novel of Golding, there is really no reason not to read it.