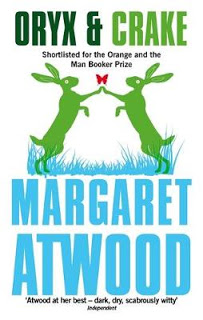 All in all I liked Oryx and Crake. Margaret Atwood is writing in a very technical manner, at least it felt like that to me, with scenes and characters constructed in a certain way. That is both instructional and a bit off putting, because once you become aware of it, it distracts from the plot. The plot itself is simple enough: the world has ended and there is this half crazed old man who is reminiscing over what happened. At first it is all unnervingly vague, with things being kept from the reader as the feelings and mental issues of the main (and single) character of the book are being declared. Then, when vagueness cannot be sustained anymore, it is all told as a linear story of what happened, with clear explanations of everything. No mystery left.

To me, it felt like Atwood wanted to warn about the way we treat our world and she just exaggerated some things while letting others be whatever she wanted them to be. From a scientific and sociological standpoint some of the things described are spot on, others are complete bogus. I would go into details, but I don't want to spoil the story. One example is the marketing brands that she cooked up and that are all (and I mean all) phonetically spelled descriptions or sometimes puns. All companies, all product names, all new animal names are like that and it gets really tiresome after a while. Also people are able to do wonderful (or horrible) new things in some areas and not advance at all in others. The timeline is a little screwed up, too.

My favorite quote, the one that made me think the most, was: "All it takes," said Crake, "is the elimination of one generation. One generation of anything. Beetles, trees, microbes, scientists, speakers of French, whatever. Break the link in time between one generation and the next, and it's game over forever" . He is referring to technology after a post apocalyptic event. There are few people that understand any instructions left by makers of advanced technology and the ones that can are ill equipped for survival.

The book does feel like it was written as standalone, with the possibility of being continued, which is a good thing: no ending cliffhangers and too much setting up the next books. The title is weirdly misleading, though, as both Oryx and Crake appear very little in the memories of the main character. Why was the book named so? It makes little sense. I am not sure if I will be reading the next books in the MaddAddam trilogy.

Bottom line: good, although a tad bland writing. A single character reminiscing is all that happens in the book. Grand ideas that most of the time make sense, but sometimes fall flat. Scientifically things don't go as she described.