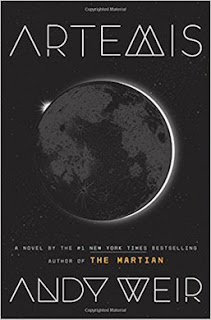 The Martian was a total surprise as it took the world by storm and became beloved by all science, tech and fast talking pun lovers in the world. Artemis, on the other hand, will not be. Andy Weir writes another book about a supersmart tech savvy character with a great sense of humor, this time solving technical problems on the Moon. Is it as good as The Martian? I don't know, because now I have a template and knew what to expect. Without the element of surprise, it's difficult to compare the two books. Yet I finished reading the novel in a day. That's gotta count for something.

Stylistically it is first person, filled with dialogue and action. It's incredibly easy to read. This time, the main character is a young woman and the location is a city on the Moon. Andy Weir is nothing if not optimistic, so in his book we do get there. I thought the action was following the pattern of danger-action-solution too closely, so much in fact that at one time I saw the entire story as a big adventure game. I will bet you lots of slugs that Weir loved Sierra games as much as the next geek (that being me).

Bottom line is that I liked the book, I gobbled it up and enjoyed it to the end. I didn't like Jazz Bashara as much as Mark Watney and, while the technological descriptions kept me interested, I still think that space mechanics and Martian farming trump EVA shenanigans and vacuum welding any time. It was still damn entertaining, though.