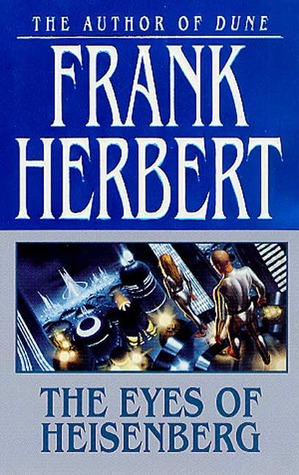 Frank Herbert's writing feels paradoxical to me, as he examines the minutiae of individual characters or particular scenes, yet his main focus always remains on the situation as a whole. His heroes are worlds entire, with people just instruments of inevitable evolution or death. The Eyes of Heisenberg might be Herbert's alternative to Zamyatin's We or Aldous Huxley's Brave New World. The same oppressive dystopia of clinical control of society, the rebels, the groups of people vying for control and/or survival, the epic sweeping finale. Yet, where a central protagonist was the focus of those books, this one refuses to hold any one person to a rank high enough to outshine all of the others.

Imagine a world ruled by Optimen, immortal people living in their own bubble of beliefs and absolute power, served by the Folk, cloned and genetically engineered people destined for a centuries life of predetermined work, yet still mortal, rarely rewarded for their servitude with the permission to procreate. The world has become this after a terrible war between Optimen and cyborgs, in which the Optimen prevailed. A couple of young parents come to the clinic for the "cutting", where the embryo is examined, genetically manipulated against flaws, then put in a growing vat. But this embryo is special! A race between several groups of people is on to hide, preserve, destroy or use it as bait.

You know that I don't usually describe the book plot in that much detail for fear of spoiling the story, but in this case I feel it is warranted, as The Eyes of Heisenberg is so full of technobabble it takes great effort to start reading it. Once the names and who is who are clear, the book is easy to read, but the beginning of the book... ugh! Especially since genetics wasn't really developed at the time, and all of the futuristic mumbo jumbo is obviously bull.

I really liked the idea of the story. Herbert always had great imaginative ideas that were not limited by his ability to express them. He will spend as much time or explanation for any detail or person as he needs, then sweep them over like they never mattered just a bit later. The idea was always first! It took me some time to realize this, but Herbert always rushes the endings. He builds this incredible set of worlds and then, at the very end, he gets impatient and does it over with. It's not as bad as Peter F. Hamilton, but it's there. I guess it takes a lot of determination and planning to keep a consistent pace throughout a book.

I am sure you will be curious to know if this book, published in 1966, just a year after Dune (together with two other novels), is anything like the book that made Herbert famous. It does. People are cloned in axolotl tanks, organizations form around their approach to the solution of life: technical minded cyborgs, sterile immortals manipulating genes, couriers developing humanistic methods of communication and analysis. Some of the inner thoughts put on page, the tool that made me fall in love with Dune in the first place, is there. There is also that permeating generic idea of the strong coupling between environment and life. Somehow I want Herbert to come back and write books in the Starcraft or Alien universes, I am sure he would have loved those worlds.

Bottom line: not a perfect book and feeling a bit dated - note that I did compare it with work written three or four decades before - but still entertaining and evocative of Herbert's general ideas and style. Pandora is coming next, all four books.