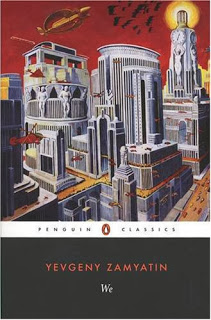 We is a classic book, written by Russian author Yevgeny Zamyatin, who envisioned how the future in the hands of the Bolsheviks will work against the individual. He imagined a world in which all people shave their head, wear the same uniform and have numbers instead of names and live in completely transparent buildings, with no privacy. As the preface of the book there are three commentaries on Zamiatin's genius, history as a writer in Russia, then his voluntary exile and the interdiction of his works in Russia.

So did I like the book? No. To say that is dated is an understatement, but it's not only that. The style is that of a diary, but one in which dialogues between people are described verbatim. The way they speak is emotional, hysterical, they interrupt each other and words are incoherent, so contradictory to the premise of the book. Even the inner thoughts of the main character are chaotic, childish, delirious, with wild mood swings. It was so horrible that, after deciding that 200 PDF pages were not going to be a lot of reading, I stopped at 50 and started skipping ahead. The entire book is like that.

Maybe Zamiatin was a great writer, but I don't see it. Just because he was Russian is no excuse for his incoherence. It felt like he wrote the book while intoxicated; with too much coffee. Even if he starts his book with Dear readers, you must think, at least a little. It helps, I believe that it was his duty as a writer to communicate his ideas in a digestible form. Maybe thinking is different from person to person, Zamiatin. If I think about it, the story within is similar to the movie Equilibrium, only that was more action based, as any American movie is prone to be, and watchable. The same champion of the system being seduced (through a woman, how else?) by the emotions that he was sworn to fight against.

About the subject of the book, I can say that stories about rebels fighting Utopian regimes are making me feel conflicted. I care about the personal desires of the individual, but I also care about the overall system. One must understand that a centralized and overall controlled system is as disturbing to a person that experienced individual freedom as is a decentralized system based on individuals is for someone that lived in a different environment. To assume that one or the other knows better is just arrogant and stupid. The worse thing that can happen, in my view, is to only have one acceptable system that, even if we could leave one country for another, would be the same all over the world.

On the other hand, once you, as an individual, decide that something is right and something is wrong, you have a responsibility to act. I just remember that quote Slaves dream not of freedom, but of becoming masters. It would be a lot easier for me to accept people rebelling against systems if they would stop attempting to change the world for everybody, not just themselves.

Well, I will leave you with a quote from the book, one that seemed eerily contemporary: If human liberty is equal to zero, man does not commit any crime.

No spam Siderite, just trying to get in touch with people interested by the topic, as it is really dear to my heart. Thank you very much for your advices , we&#39;ll try to modifiy the page. If uou want a free link to the album: theglassfortress@gmail.com Kind regards Alain

I know your comment is really spam, but since it is related to the post, I will allow it. My two cents is that you should make the sample/teasers more obviously available. I actually searched on Google before I realized that you had samples at the bottom of the page.

Excellent post Siderite! I&#39;d like to take this opportunity for drawing your attention on the recent release of a concept album : &quot;The Glass Fortress&quot;. It is a free and simplified adaptation of the novel, but quintessential. if you are interested, more information can be found by clicking on the following link: http://www.remiorts.com/index.php/albums-remiorts/41-remi-project/96-the-glass-fortress