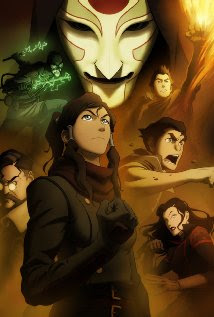 I loved the first Avatar animated series. It was deep, funny and yet innocent. A perfect kid show, but one in which an adult could find finer underlying levels of understanding. So it is no wonder that I eagerly awaited the release of Legend of Korra.

Now, that the first season is over, I can have an opinion on it. The show is not about a little kid anymore, it's about a teenager avatar. She, for she is a female, lives in a technological steampunkish world, something that is pretty hard to understand, considering she is the granddaughter of Ang, the hero of the first series, and it all happens merely 70 years afterwards. The innocence of childhood is replaced by the impetuosity of teen age, complete with mood swings, romantic feelings and a strong false sense of infallibility. The elemental countries are now united, so the only possible threat can come from a terrorist organization. There are moments of real fun, but not that many.

Bottom line: it's a completely different show! While in the first Avatar one could find strong moral values underlying what the characters did and the viewer would watch the show waiting to see what would Ang do next in the face of overwhelming adversity, now the focus is on what the avatar girl is feeling when she is not the center of attention and how she gets angry and motivated to use power to solve things. Not something terribly surprising in an American show, but really disturbing in a sequel to such beautiful a series.

So, while the show is nicely animated, the world interesting and the story passable, the overwhelming feeling I get is disappointment. I really do hope something will come out of the next seasons, which I will watch religiously, but let's face it: I do it for Ang.