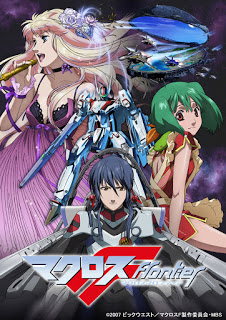 Macross Frontier is a 2008 anime series of 25 episodes set in the Macross universe, itself 25 years old at the time. Humanity is expanding in the galaxy using huge self contained colony fleets that are defended by the ubiquitous Mecha humanoid robots. Their enemies, a strange race of space bugs that seem to have no mind of their own, but whose method of communication or reason for doing anything is a mystery. Enter Alto, a beautiful guy - and when I say beautiful I mean it, as he is cute as a girl and many times in the series people address him as one, to his chagrin - that wants to be a pilot. He accidentally joins up with an elite piloting force and there the story seems to become interesting: space battles, interesting aliens, amazing tech, even political machinations. But wait! In Japan there has to be more. And there is! Alto is 17 years old, that means he is also in high school. Two of his pilot buddies are his colleagues. Then there is this galactic idol pop star singer that is very beautiful and somehow falls for Alto and subsequently becomes a student in the same class! And there is another girl who also wants to be a singer and she becomes one rivalling the first, only to fall for Alto and... join the same high school class! And all the time they need to act on their feelings, without actually expressing them in an articulate way, and trying to protect one thing or the other. And if you thought the two singers are just a filler device, not at all connected to the main story, you are wrong. The singing of one of them seems to affect the alien bugs!

To quote a friend, WTF is wrong with the Japanese? Why would you mix space battles with j-pop and high school? Why hasn't there appeared a service that strips the annoying 2 minute singing at the beginning and then at the end of every episode and lets you watch everything start to end? It would be perfect if it would also remove in separate streams the fighting plus the sci-fi from the ridiculous fascination with high school puppy love!

To conclude, it wasn't great by any means, and the insistence of showing every space battle in the context of a pop song was really annoying. The story was OK, although I could spoil it for you in about 5 minutes. The animation was standard, I didn't think there were any issues with it. If you love the kind of "oh, oh, poor me, I am in a love triangle and can't get out" story, this is the one for you. The sci-fi was, really, taking the backseat in this one. I have to admit, though, that the highschool theme was not exaggerated much, nor was it absurd to the point of annoyance like in Elfen Lied, for example.