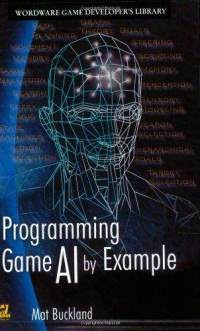 Programming Game AI by Example is one of those books that would have changed my life had I had read them when I was 15. Mat Buckland is taking a really high tech portion of game making and turning it into child's play. With source code!

From the very beginning we are being told that AI in games is different from what we would normally associate with Artificial Intelligence. AI in games is the thing that makes game agents look smart, but let the user enjoy the game the most. In other words, something that seems smart, but is just stupid enough for you to continue playing.

The book is comprised of ten chapters, heavy with code, but very well structured. The main tool in use are Finite State Machines, but we first get a mechanics physics lecture in chapter 1 where we learn what a vector is and how to normalize it and how to use this in the game physics. Moving to chapter 2, we learn what a state machine is and how to optimize memory by making each one a singleton, how to compose them and why more exciting aspects of artificial intelligence, like say neural networks, are not used more in games. We delve further into methods to optimize what we have learned to make it practical: prioritized dithering, partitioning, BSP, quad and oct trees, fuzzy-Q logic, cell space partitioning, all with code examples, in chapter 3. Chapter 5 is reserved for graphs, Dijkstra, A* and such. Chapter 6 goes into integrating Lua into your games, as a good tool to define and tweak the innards of your game before compiling it all for performance into a single code base. Raven, the example game engine, is detailed in chapter 7. Path planning is described in chapter 8, complete with many optimizations and tricks to make an algorithmic movement of units look natural and smart. Chapter 9 is about goal driven agent behaviour, where we learn how to make an agent define goals and act upon those goals. The composite pattern is suggested as a good solution for goals within goals. We end with a very interesting chapter about fuzzy logic. The basis of this is to fuzzify a situation, infer a behaviour, then defuzzify into a usable algorithmic value.

The bottom line is that this is a very easy book to read, explaining matter-of-factly how to easily create the intelligence in games like Fifa or Counter Strike. The code examples are extensive, but not necessary to understand the gist of things. At the end, it is both a fascinating and intriguing read as well as a good reference book for when you actually need this stuff.