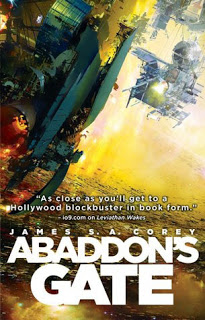 The authors known as James S.A. Corey have planned the series of books The Expanse to have three volumes. As such, Abaddon's Gate feels like a wraparound of the stories so far, while also remaining a good standalone feature. However, because of the overwhelmingly positive response for the series, it was continued for another three volumes, and now three more are announced. There are also various novellas in between books. That is a problem, since this book ends up undoing what the first two started. But let's not get ahead of ourselves here, just be warned that this review may contain spoilers, without which I couldn't possibly comment on the plot of the book.

If you are only interested in my general opinion of the book, I believe it is consistent with the quality of the second. There are more characters, but also less compelling ones. There is a great mystery, but a rather bland one. There is a danger, well... several of them in succession, but they feel a bit artificial, just to keep the tension going. I am not complaining, but I am also not thrilled. As in Caliban's War, there are several characters that seem put there just to annoy me. There is this lesbian preacher that always needs to save the souls of everybody around, for example; she kind of felt like someone nagged the writers to put more progressive characters in, like writing about giant alien artifacts in space is not progressive! Fortunately, she is also important to the plot, so she is not just added there like condiment on food, yet the parts of her philosophizing about the meaning of God bored me to tears. Then there is a psychotic captain that doesn't seem to be a person at all. He just randomly appears and does stuff, and I am not the only one noticing this. And there are more, but I don't feel the need to complain that much. Here be spoilers!

The story revolves around a ring like structure that the alien "protomolecule" has constructed outside the orbit of Uranus. A random ship goes through revealing it is in fact a wormhole. An entire fleet of ships gets in, for various reasons, and again Holden and his crew are in the middle of it all. Yet their roles are quite limited up until very close to the end of the book, the main character here being the sister of Juliette Mao who seems to be seriously unhinged, moving from dangerous psycho killer to kind person who wants to fix things. Quite a lot of psychos in this book. The end opens up a wormhole hub, thus allowing access to the stars. And that is what I take offense with.

You see, the beauty of the series, as made clear by the TV show actually and less by the books, is that it presents a plausible solar human occupation, something close by, that we could achieve in about a century or so, given the magical fusion Epstein drive. It goes into the social, the economic, the political, less in the technical, but still quite a lot. It brings hope. Then there is this alien thing that we don't understand which throws a wrench in our understanding of our place in the Universe. So much to explore there (unintended pun, I assure you). Yet, the end of the third book in The Expanse opens up the stars, even more magically than the Epstein drive, ending the promise of a realistic hard science fiction universe and going towards the implausible and yet so overused "humanity among the stars" trope. I really hope they don't fuck this up for me!

Bottom line: I feel like this book had flaws in its characters, while the story was kept ablaze just by random dangers and conflicts that did not engage me as a reader. Yes, I wanted to see how it all unfurls, but I couldn't care less about the people involved. While it certainly has kept me entertained and it is a good book, I couldn't help begrudging this as well as the ending, which for me ended the promise of exploration and colonization of the Solar system, while going into that all too trodded interstellar medium (hearing me about it it seems like it is seething with stuff, but I mean the literary medium).

P.S. Abaddon was a gate associated to the realm of the dead from the Hebrew Bible.