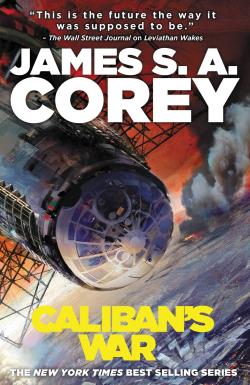 The second book of The Expanse is much better written than the first, however the story is a little weaker. There are more of the details one would already be familiar with from the TV show, the character of Chrisjen Avasarala is introduced and chapters are written from the perspective of many more characters than just Miller and Holden. That means there are many more chances to completely dislike a chapter if you hate the character. For me, that character was Prax, someone who would endanger everybody and himself with random emotional outbursts. Perhaps he was put there just to offset the slightly similar behavior of Holden, who now looks like the paragon of professionalism in comparison.

The plot revolves around yet another alien infestation, this time on Ganymede, only it is not clear who or what is actually responsible. The already angered Mars and Earth navies use this as a pretext to attack each other, while the Rocinante crew find themselves agents of the OPA, sent to find out what happened. As opposed to Leviathan Wakes, the book adds two major female characters, Avasarala and Bobbie, a Martian marine, and a lot of the story is about their interaction. In truth, what the Rocinante does on Ganymede is almost inconsequential until they make contact with the two women, which felt like the main characters of the book, if I had to choose. This is also a sign of a better built world, in which one has to struggle to identify the lead characters.

While the book was clearly better (some even suggest it is the best in the series), I didn't find myself attracted so much by the story. Instead of a mystery, like in the first, we pretty much discover from the beginning what is going on and only halfheartedly root for the characters to get in the same position the reader has been all along. I like Avasarala's character, but in order to show how badass she is, we have to go through all the political machinations in the UN which I couldn't care less about. Bobbie was slightly more interesting, but she starts off with such low confidence that until she gets to embrace her role there is so much filler. And Prax... don't get me started on that asshole! He is central to the Rocinante crew quickly finding out what has happened, but for the rest of the book he just drags along. He would have been a perfect character to be killed off, adding to the darkness of the tale.

And I think this is where the books and the TV series diverge the most. While the show is perfectly content to show a dark, hopeless world, the books fight to maintain some sort of feeling of normalcy, of hope, leading to reasonably happy endings. The show recognizes that in a Solar System built on exploitation, armed spaceships and politics there is no hope for the little man, there is no silver lining, there are just people trying to survive while colossal forces push them around like leaves in the wind: another reason to watch the series, at least the first season, before starting reading the book.

Bottom line: Caliban's War, by James S.A. Corey, contains no reference to a character called Caliban, which is a Shakespeare character. In the play The Tempest, Caliban is a part-human monster and slave who rebels against his masters. Even starting from the title, the authors spill the beans on what the story is all about. While I enjoyed the book and now I am reading the third one in the series, I can't help wishing they would have maintained the tension and mystery of Leviathan Wakes.