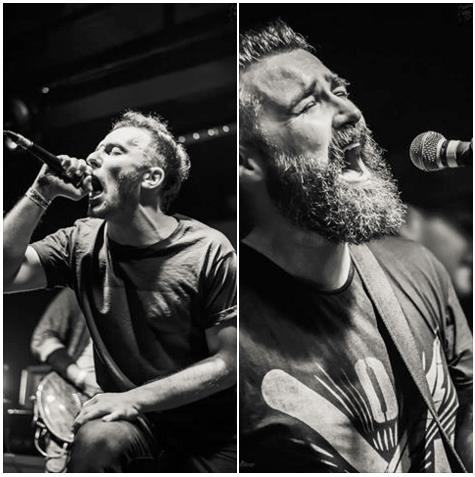 Coma is my favorite Romanian bands and I've known them almost since they were formed. They have been singing for 16 years now and it was nice to see the concert room filled with people of all ages, including a 16 year old boy who had his birthday on the same day. For me this concert was a double whammy, as the lead singer of one of the opening bands is a former colleague of mine. Yeah, small world.

The opening bands where Till Lungs Collapse and Pinholes. TLC were nice, with my boy Pava almost collapsing his lungs. Pinholes were a bit strange: from five people on the stage, only the drummer didn't sport a guitar. Their writing process must be weird. Then Coma came on stage, at about 0:00 and played for an hour an a half. They were great! I've been to many of their concerts and this is one of the best yet. The band's "curse" struck again, on Dan Costea's acoustic guitar, but they were able to continue without it with no problems. They sang all time favorites, some newer songs, they also did Morphine, which is one of my personal favorite songs of theirs. I wish they would have managed to squeeze Daddy in there, or at least 3 Minute.

Catalin Chelemen was on fire, Dan was doing his usual PR thing and he was great as well and it seemed like they all had a good chemistry with the new guitar player, Matei Tibacu. Well, new for me. Unfortunately the sound in Fabrica was pretty bad. While inside you could kind of focus on the right notes, especially if you knew what the songs were supposed to play like, if you try to gauge the quality of the concert from the videos that are online now, you want to mute it almost instantly. People were respectful enough not to smoke during the concert (I can't wait for the smoking ban to come in effect!), but my clothes still smelled of tobacco when I got home, from people smoking in the next room.

As far as I know you can hear them next at the Electric Castle Festival, July 14-17, with so many other great bands. I am tempted to go there, but I am not one for festivals. Great job, Coma, and good luck!

Click here to see some nice photos from the concert.