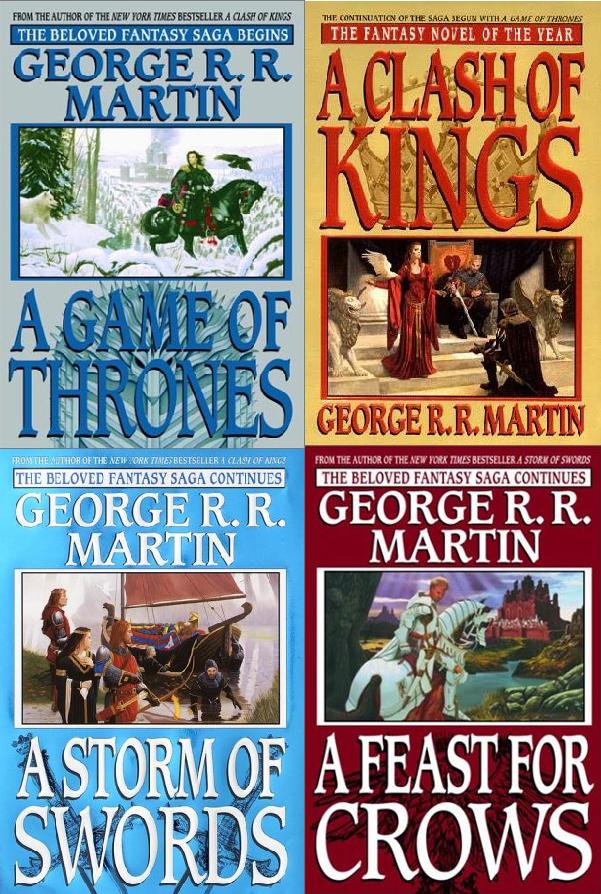 I almost expected the guy to be Canadian. :) This series of fantasy books is a masterpiece of writing. Not only it is complex of plot and emotion, but the characters are many, diverse and (most of all) different.

So far, the A Song of Ice and Fire saga, written by American author George R. R. Martin, consists of four books, the first published in 1996 and the last in 2005. At least three other books are planned in this series. The plot is a historical fantasy, but one unlike the books I've read recently. The aspects of magic and otherworldiness are rare, the bulk of the writing being about the feudal world, with kings, knights, low borns, maidens and whores, thieves, rapists and murderers, plotters and honorable men. No wonder that, lacking a lot of special effects, the story has been selected as the basis for a TV series.

But what is more important than anything is that the writing is really good. The characters are all human, with needs, desires, qualities and faults. You can't help but empathise with them, only to suffer at the cruel fate the writer bestows upon them. Not one escapes unscathed from the malice and pettiness of other people or from shere bad luck. You get to like the characters, then Martin fucks them up. I really wanted to use a more elevated language here, but it's the truth: the world he depicts seems horribly real, not a fairy tale of valiant white knights and pure maidens, but of ridiculous people grabbing lustfully whatever life offers them as it is unlikely their fortune is going to last long.

For the bad part, though, I think the author went too deep, got himself responsible for a lot of characters that he must now move forward, in gruesome detail. The fourth book became so large that he had to split it. He did so by character and geography, rather than by time, so a lot of the characters were missing from the fourth book, A Feast for Crows, and left for the fifth, but acting in the same timeline. At the end of A Feast for Crows the author explains his decision to not just split the book in the middle with a "To Be Continued" ending, and hopes for a publication of the second half in a year. That was in 2005. Ahem.

A lot of people are a bit confused by the long wait for the fifth book. Martin keeps making promises that he doesn't keep and, in July this year, he announced that A Dance with Dragons is already 1400 pages long and 5 chapters close to completion. I hope he does finish it quickly enough, although that would only prolong my suffering anyway. I am sure the fifth book will be as brilliant as the others, but then I will have to wait another 5 years for the sixth. I know TV series usually have no plot, but at least they come weekly ;)

Bottom line: The books are great, I recommend them to any lover of fantasy or even historical novels. I can hardly wait for the TV series, A Game of Thrones, as well.