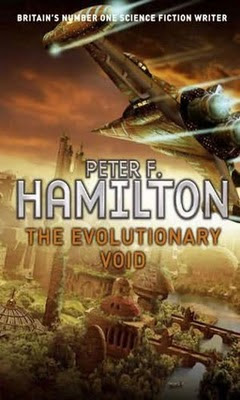 The Void Trilogy ends with The Evolutionary Void in a typical Hamiltonian way: completely off the scale science and fights, actions with galactic and universal implications and the bunch of special heroic people that lead the entire story to a climactic finish.

I couldn't wait for the last book of the trilogy to get out and I finally got hold of it, but more than a year had passed since reading the first two. Most of the characters I had to remember while reading the book, something that degraded a bit the reading experience. Take it as a hint: before starting a Peter F. Hamilton series of books, make sure they are all available before you start, as you can't let them out of your hands until you get to the end and the feeling of loss is horrible.

Now, about the book itself. The middle of the galaxy hosts an all devouring and unstoppable Void, inside which thought is the main law of physics and which feeds on the mass of the worlds outside in order to sustain itself. Basically, the heroes in the book are battling galactic cancer. The style of the narrative mixes incredibly advanced technology with an archetypal feudal heroic fantasy, bringing them flawlessly together at the end. Not everything makes sense, but then again, not everything could. Simple solutions to problems were available, but never explored, and some characters were popping in and out of the book stream like so many quantum fluctuations. But on the whole, it was a great reading, keeping me connected for the entire length and, unexpectedly judging by the Hamilton books I have read, with a good, satisfying ending.

Now, I plan on reading some non fiction books, then I will probably return to the Prince of Nothing universe. After that, who knows?