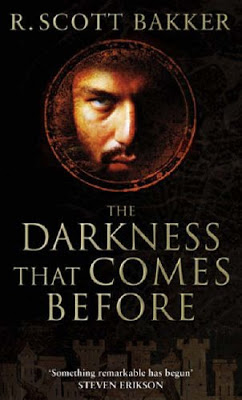 While waiting for the tenth book in the Malazan Book of the Fallen saga, I went and read Prince of Nothing, by another Canadian author, R. Scott Bakker. This is a three book story, first published in 2004, about what I can only describe as a psychopath, member of a rationalizing sect, going out into the world to protect the secret of said sect.

The book is well written, although not nearly as brilliant as the Malazan series. However the subject of it is very interesting, at least from my standpoint. It concerns a human that is trained in the ways of mental manipulation, rationale and causality, something akin to the Vulcans from StarTrek, but with a very human side to it, the one that pushes one to amass power and use their knowledge to manipulate.

No wonder that the "prince of nothing" is the central character in the books, but not the main character, the role being left to a sorcerer, a man that is at the same time keeper of arcane knowledge and the scorn of ordinary humans. I can't help but empathize with the guy: basically a geek in love with a whore, while a psychopath destroys his world with insidious manipulation. ;)

There is another central character to the story, an insane barbarian, like a tortured Conan, who is both terrifyingly strong and ridiculously fragile, both a mindless warrior and a brilliant strategist. He is also, like Achamian the sorcerer, an exponent of humanity.

Prince of Nothing is a very smart book, one that can only get better as the writing skills of Scott Bakker improve. Its assets are both a scientific approach to the human psyche and a veritable intrigue of arcane powers in conflict with each other on the background of huge masses of clueless people. The plot itself is similar to the story in the Berserk manga, at least its start, where the strong warrior chooses to follow the charismatic and ambitious leader only to his doom. The moral, as I saw it, is that while we choose to live our lives with eyes closed, we cannot in good conscience pretend to deserve control over what happens to us.

I hope the series, known as "The Second Apocalypse", continues, since Prince of Nothing raised more questions than gave answers and the plot really caught my attention. A nice book that I warmly recommend.

<p>You are very welcome. It is nice to get comments like these, not only because it gives extra purpose to the blog, but because I had almost forgotten about this book and I would probably not have read the rest of them. :) So thank you back!</p>

<p>Prince Of Nothing is a great book written by a talented author. It was a pleasure to read it and I guess I wouldn't mind doing it again.<br>I chose this one to read following your recommendation here, by the way.<br>Many thanks to you!</p>