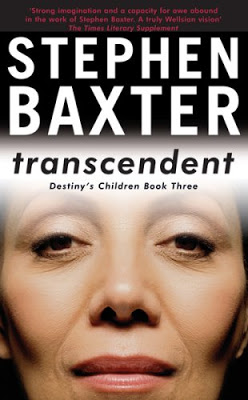 Oh, no! After such a glorious second volume, Baxter regressed for the third volume of the Destiny's Children series, Transcendent. What you get is basically a continuation of the first volume, but without the emotional content or the cool ideas of Coalescent. Same awkward family relationships that no one really cares about, same main character who is actually driven by the actions and thoughts of people around him, rather than his own, same single final moment that shapes the world without actually making the reader feel anything, same lengthy dialogue that brings important issues into discussion, but without drawing the reader in.

As Stalin said, one death is a tragedy, one million is a statistic. Same thing applies to humans 500.000 years into the future, going back into the past to redeem the sins of humanity. No one cares! The Earth is pushed to the edge by global warming and the lead character is championing a great hydrate stabilisation engineering project. Who cares?!

Bottom line: the book was well written, but badly designed. It's like an engineer doing a great job building something that is fundamentally flawed. I struggled to finish the book just as I've struggled to finish Coalescent, which was far more interesting to begin with. The reason is simple: the reader cannot really empathise with any of the characters, except in disparate fragments of the storyline.