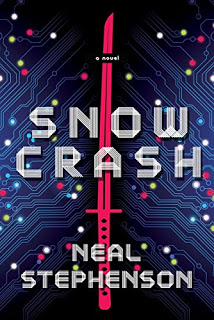 I started reading Neal Stephenson at a friend's recommendation. That reminded me of the cyberpunk novels that I used to read in my teenage years and enjoy so much. However, I remember them slightly more fun :) That's why I would call Snow Crash more of a Cy-Fi novel, a piece of cyberpunk with a slightly overexagerated plot. Even Wikipedia calls it a post-cyberpunk novel. You see, when Gibson wrote about hackers and the artificial intelligences and the future, he was actually trying to convey a believable, predictable future. I believe Neal Stephenson actually crossed the line and pushed the vision a little in order to put some ideas on the table.

However, it was still a good novel, with interesting characters, fantastic vision of the future and quite a bit of research, which he modestly attributed to a lot of his friends.

The story revolves around Hiro Protagonist, a sword wielding computer hacker, and Y.T. (Yours Truly - a 15 years old skateboard courier), both caught in a complex plot that I cannot reveal without spoiling the read. It has some of the standard cyberpunk motiffs like the collapse of governments and law, the world being ruled by corporations like the Mafia, the church and Mr. Lee's greater Hong Kong (to name a few) and a focus on the services individual people can provide rather than the material benefits of technological items.

I recommend reading it, although some parts of the "future" are already old and silly by now. I've also read some short novels like The Great Simoleon Caper and Spew, that were both good reads, especially the latter. I am moving on to Diamond Age now.