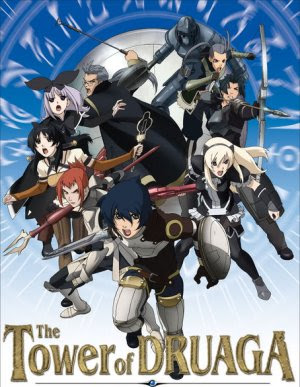 The Sword of Uruk is the continuation of The Tower of Druaga - The Aegis of Uruk, itself a spawn of the The Tower of Druaga arcade game by Namco. I must confess I have not watched the first part before venturing to see the second, but as the story unfolded, it was pretty clear what had transpired before. The problem, thus, was not that I didn't "get it".

The animation itself is typically Japanese, but one of the styles that is found usually in children animations. I didn't really mind that so much either, except the lazy 3D CGI bits that seems to be the creation of some 90's computer. The script, though, was a combination of ridicule, then ridiculous. I liked some of the jaunts directed to some movies or other anime, but in the end, it was just a really childish story. Also, it seemed to go towards an RPG style feel, one of those weird Asian dress-up MMO games. I didn't like that at all.

The world in which the story unfolds is a combination of modern, old and RPG, something that continuously switches from serious to not. Or better said, from ridiculous to ludicrous.

Long story short, I couldn't finish watching it. It is at best a children animation, with nothing to be learned or admired, really.

The only thing I did notice and is worth mentioning is that it featured two audio tracks, one in Japanese and one in English. The English one had the text completely changed, the attitude of the voice actors was completely different and it made me realize how much people who only watch the dubbed versions miss out on Japanese animation. It was really fun to watch an episode with English dubbing and English subtitles, both very different from each other, as the subtitles were direct translations from Japanese.