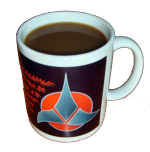 As I was noting a few posts earlier, I recently watched the entire Star Trek Deep Space 9 series. This part of the franchise showed a lot of the Klingons as well as their choice of beverages: Bloodwine and Raktajino. The former is a strong alcoholic beverage which I will not get into, and the latter is a strong and spicy coffee that grew on the crew of the space station. As I knew that the Klingon culture spawned an entire real life current, including a complete language, I was curious if they also replicated (pun not intended :) ) their recipes. And I found that, indeed, there was at least one Raktajino recipe on the net: Klingon Raktajino Klah Version.

I was not satisfied, though. You see, Klingons are supposed to be mighty warriors. Why would they throw a bit of sweet chocolate, some cocoa and a bit of cinnamon and nutmeg into their drinks if it's not going to be effective in battle? So I started researching the different active ingredients in the recipe, as well as other possible sources for a stronger effect. Here is my research on it, the result and the effects on myself (as any mad scientist knows, you first experiment on helpless victims or yourself. I was fresh out of victims that day).

Let's first examine the main stuff: coffee. There are other energizing beverages in the world, like tea, or mate tea, or even stuff like Burn or Red Bull. I will not touch the chemical energizer drinks in this post because I couldn't possibly replicate one out of simple ingredients (or could I? Note to self: make a one hundred times stronger energizer drink than Red Bull. Get more helpless victims.). Something I've recently (to my shame) found out is that when people researched coffee, tea and mate they called the main active ingredient for each by the substance they started with: caffeine, theine and mateine. Later on, it was proven to be the exact same substance. So there would be no point of mixing these together, since they have the same effect.

However, there are other ingredients in the beverages described above, like catechins, which are found in white and green tea, mostly. Also, found in cocoa, so there might be something there for the Raktajino, after all. The effect of flavanols on health is mixed, but it is clear that it has a health benefit for heart conditions as well as an apparent anti-aging effect when combined with regular exercise. Nothing Klingons like more, by the way.

Ok, which of these contains the biggest concentration of flavanols: cocoa or white tea? It is irrelevant, as this is actually a class of substances and the flavanols in each (and in wine, btw) are different. So, let's mix them up for starters.

What other active ingredients does cocoa have, except the flavanols? Well, it seems it contains something called Theobromine. It can appear naturally in the body as a result of metabolising caffeine, btw, so it seems like a good choice for the acceleration or augmentation of the effect of coffee. Also, it has a slight aphrodisiac effect :)

So, we got a mix of cocoa and white tea, something that is good for the heart, slows ageing and also should accelerate the absorption of coffee. But the recipe also had Cinnamon in it. So let's see what it contains. Well, it is called Cinnamaldehyde which sports effects like antimicrobial and anticancer. But what cinnamon does most is increase the blood flow, so also the metabolism, so the absorption of all the substances in our magic mix.

Of, if we have already a substance that increases blood flow and metabolism, why not use one that is really hot: Capsaicin? Yes, you read that right, it's the active ingredient in chilli peppers and the thing that tricks the heat sensors in our body to react to lower temperatures, giving us the sensation of heat. It also increases blood circulation and regulates sugar levels.

The net recipe also showed a use of nutmeg. I suspect that is mostly for the aroma, as large quantities of nutmeg are toxic, even if it also has a deliriant effect. Also, the "recreational" properties of nutmeg can take about four hours to take effect, so we don't actually need the stuff.

Ok. We have the ingredients we need to add to our coffee: cinnamon, cocoa, white or green tea and chilly powder. I used 2 spoon of cinnamon, 2 of cocoa, enough green tea for 2 litres of strong tea and one tablespoon of chilly powder. Then I've added it in my coffee. I also drank it with hot water only. The best results were with coffee, some sugar to add to the burn, and a bit of milk to take the edge off the tongue.

The effects: I am not a big drinker of coffee, but ever since I've moved to this job where they had a coffee machine, I would drink one cup a day. Sometimes four. Anyway, after a while it didn't seem to have any effect, other than a deficiency of calcium (that's another story, just remember to add calcium and vitamin D to your diet if you are a coffee drinker). So, the day I used a small portion of my spice in my coffee, not only did it taste great! but it also gave me a jittery active state that I hadn't felt since the first days of drinking coffee, a state that lasted for... 6 hours straight!

So, to wrap it up, I can't give you a recipe for my version of Raktajino, as I am experimenting with various quantities, but mix a lot of cocoa and cinnamon with your coffee, then add some concentrated green tea and as much chilly powder as your stomach can stand: Raktajino, Siderite version!. (I used strong text there because it is so strong of a coffee, see?)

Do let me know if you drink it and tell me what effect it had on you. The excitement of the research may be responsible for the jittery effect, after all, although I doubt it.

Thanks, Eradicator! Although I am not sure where these ingredients can be easily found all at once. How about breaking it down into base components?

Hi, here is the raktajino I posted on instuctables a few years ago...hope you like! http://www.instructables.com/id/Klingon-Raktajino/

I am happy to see people trying it out. What I am very interested in, though, is the difference in the buzz. Has anyone else but me experienced the extra power in a coffee with the mix?

This recipe is wonderful! I used a bit of mint extract (Jake Sisko did say that the froth had a minty taste) and cayenne pepper instead of chile (because i like the pain level to be EXTREMELY HIGH) and it made my mouth explode so... good on ya!

You are not alone in your eccentric endeavors and may the force be with you! I too have attempted to create the masters of the universe, super tea and power ranger danger smoothies using these ingredients as well as with things like a little oj or vinegar even some harder stuff - had lots of fun and discovered tast buds I never thought o had. Ha ha ! Two very jittery thumbs up!

Siderite - I, too, would like to find a drink worthy of the desire of (nearly) the entire DS9. I&#39;m a coffee fan, even a coffee snob, and I&#39;ll gladly experiment with your basic recipe to see if there is anything that I like. Thanks for the excellent chemical analysis and suggestions! Robert imcelllular.org