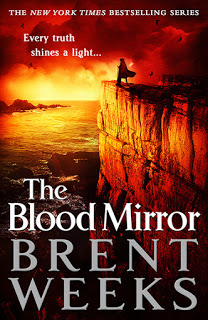 The Blood Mirror felt like the weakest book in the series, but really, if I think about it, it's the pattern that unfolded through the entire Lightbringer saga that feels wrong. The first book was amazing, with interesting characters, great world building, an intriguing story, but then came the second book - and I didn't see it then - which upended much of the concepts in the first and added many more. It was not a continuation, per se, but a reframing of the story with other parameters. Instead of closing story arcs, Brent Weeks was transforming them, kept them open and added many more. The third book made this pattern obvious and in this book it became annoying.

Forget that everybody is the relative of everybody or in the extreme the member of an organization that we didn't know existed or cared about in previous books. Forget that after we follow a character as something, we have to follow them as something completely different in the next book, because of reasons that we didn't know (or cared) about. Forget even that threatening someone's loved ones seems to control everything with maximum efficiency in this universe, while actually harming them is a forgivable offense. Nothing. Ever. Ends. It just piles on. And since there is limited space in the book, important things - like the war or what the people are actually doing when the entire establishment blows in their faces and destroys their lives - get sidelined or completely eliminated in favor of whatever insecurity Kip feels while discussing hot sex with his friends or amazingly beautiful (and totally inconsistent) wife. And of course, the book ends in another cliffhanger.

In chess, when you are overwhelmed by the complexity of the position, you simplify it. You exchange pieces until the board is clearer. In Lightbringer, enemies just enjoy threatening each other and never following up while they work together for some completely pointless goal. Just like in TV soap operas, they all hate and love each other at the same time while things that could never have been predicted by the reader happen as chaotically as possible around them.

So, the fifth book will be published this year and I will read it, but my rating on the entire series just plunged dramatically. I don't expect things to really come to any conclusion, I don't expect characters to evolve in any meaningful way anymore or the lore behind it all to ever be explained. We started with seven colors and a god, now we have 11 colors and about 200 gods, for example. The chances that all of this mess will become clear in the future are remote.