Visual Studio has a very interesting feature called Rule Sets. You basically create a file where you declare which warnings from analyzers will be ignored, displayed as info, warning or error. With the built in code analysis, but also with the help of a plethora of extensions and NuGet packages, this can be a very powerful tool. I am using VS2017 Professional for this post.

Let's start with creating a new project (a .NET Framework console app) called Rulesets, which will create the standard Program.cs file and a solution for the project. Next, right click the solution in Solution Explorer and go to Add → New Item, go to the General category and select Code Analysis Rule Set. Name it whatever you want to name it, I will call it default.ruleset, then save it. 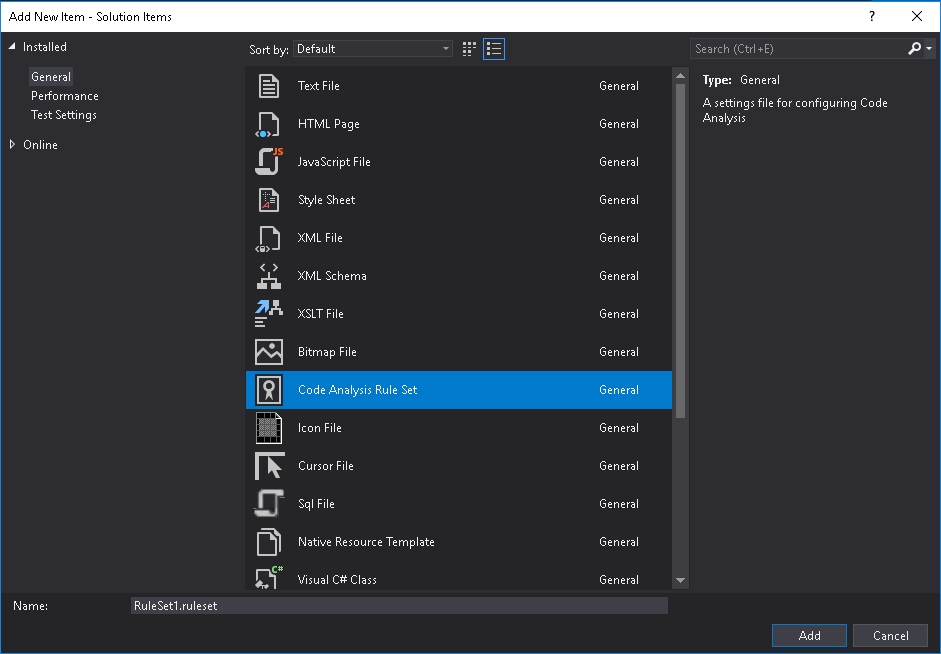 At this point you should be in a rule set editor, showing you a list of rules grouped by code analyzer id. Press F4 or go to the little wrench icon so that the Properties window is open, then give your ruleset a name (Default Rule Set) and save the file (ctrl-S). 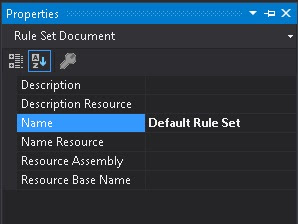 You can create as many of these files and they will be saved in the Solution Items or as a file in a project (I recommend the former) and associate them to any number of projects. Let's assign the new rule set to our project: Go to the solution properties, select Common Properties → Code Analysis Settings, then select as many projects as you want in the list in the right. Then click on the little dropdown arrow an you should be prompted with a list of possible rules, including Default Rule Set. Select it. 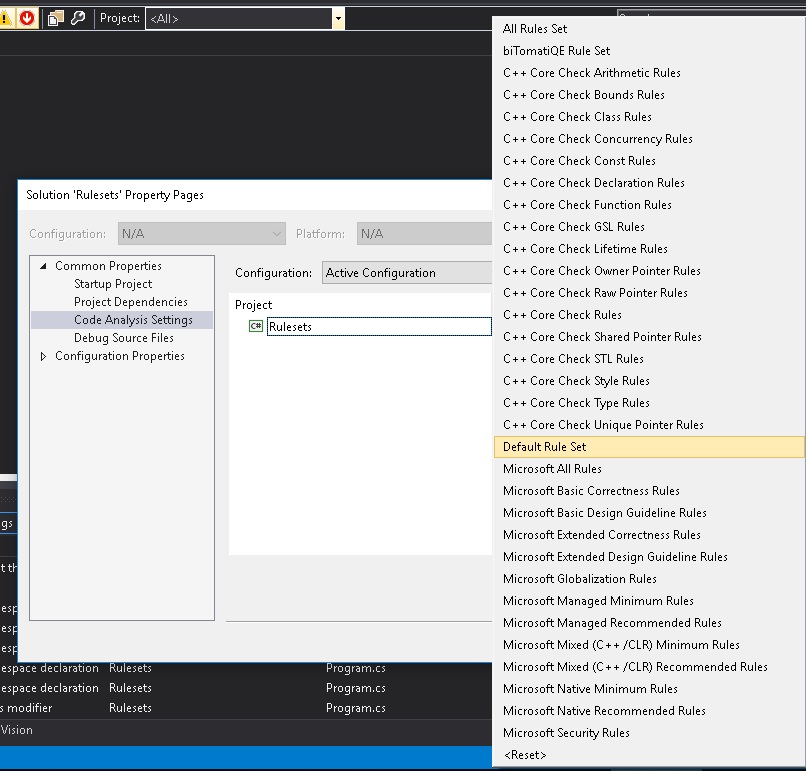 Obviously, you can just choose a Microsoft included rule set instead, but those do not take into account your own extensions/packages.

Note: in order to start an incremental process, let's say starting with the minimum recommended settings from Microsoft and then adding stuff to it, use the Include element in a .ruleset file. The files coming by default with Visual Studio can be found at %ProgramFiles(x86)%/Microsoft Visual Studio/2017/Professional/Team Tools/Static Analysis Tools/Rule Sets. Example:

From the Visual Studio GUI you can click on the folder icon in the rule set editor top bar to include other sets and the wrench icon to open the settings.

This helps a lot with having small variations between your projects. For example a tests project might have different settings. Or the data access layer project might have auto generated files that don't respect your coding standards. You can just create a new ruleset that includes the default, then disables some of the rules, like mandatory class documentation.

Note that the rule set editor is not perfect. It will only show the rules as defined in the current file, ignoring the included sets. That is why if the default for a rule is None and you set it to Warning in your base set which you then include in another set where you set it back to None, it will not be saved correctly. Some manual checks are required to ensure correctness.

The packages above are NuGets you install in your project. Just check out the list from NuGet: NuGet packages containing Analyzer. Many extensions also have a NuGet counterpart. It's your choice if you want to not bloat your Visual Studio and choose to install analyzers on a per project basis. There is one advantage more in using project packages: the analysis will pop up at build time and you can thus enforce not being able to compile without following the rules in the set.

So you've learned how to choose a rule set for your projects, how to create your own, but what do you use them for? My suggestion is to work on a complete rule set (or sets) for your entire company and then you can just enforce a coding style without having to manually code review everything.

If you are like me, then you probably installed everything in that list above and then tried it on your project... and you got tens of thousands of warnings and errors. How do you curate a rule set without having to go through every single message? I see several ways of doing this.

Some people/companies have a flagship technical project that they are very proud of. It uses all the latest technologies, it is perfectly written, thoroughly code reviewed by all the members of the team. It can do no wrong. If you have such a project, just enable all possible rules, then disable all that make suggestions for change. In the end you will have a rule set enforcing your coding style, for better or worse.

The other solution is to start with a new project, then review every message until you get none. Then start coding. An iterative process, for sure, one you will never finish, but it will be good enough after a while and it will also engage your team in technical discussions on how to improve their code, which can't possibly hurt.

Add analyzers one by one

Start with a rule set where all rules are disabled, then start reviewing them one by one, as you either chose to disable them or refactor your code. This solution may be the worse, because it gives excuses to just stop the process midway, but it might be the only one available. Anyway, try to install extensions and packages one by one, too.

Start from the coding standards

Perhaps you have a document describing the coding standards in your team. You might start from it, then look for the rules that enforce it. I think that this will only make you see how woefully inadequate your coding standards are, but it might work.

I've had the situation where I created derived rulesets from the default one (using Include) and somehow they ended up with an absolute path for the default ruleset file. It might be an issue with how the editor saves the file.

By default, rules in the ruleset editor are grouped by analyzer ID, but multiple analyzers might manage the same rules, so always manage rules individually, else you will see that enabling or disabling an entire group will change other groups as well and you won't know where you started from.

The ruleset editor is not perfect. One very annoying issue is with ruleset inheritance (doesn't load the parent rules). One example is that you want to have a general ruleset that does NOT include an analyzer (let's say the XUnit one) and then you want something inheriting the base ruleset to DO include the XUnit analyzer. While you can do it by hand, the ruleset editor will not allow you to make these changes, as the original ruleset will have every XUnit rule disabled, but the editor for the unit test one will not know this. There are two solutions for this:

I've discussed how to define and control static code analysis in your Visual Studio projects. If nothing of what is available is up to your standards, Roslyn now allows making your own code analyzers in a very simple way. Using code analyzers (and refactorings) can improve productivity, engage the team in technical analysis of standards, enforce some coding standards and help you find hard to detect errors in your code.