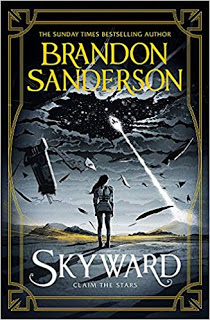 Skyward is Brandon Sanderson at his best... and worse. Yes, his best characters have always been young rebellious loud mouths with a penchant for over the top lines and punny jokes. And yes, this is a young adult novel with a classically clichéd plot. I feel guilty for liking it so much, but hey, it apparently works! Personally I feel it's a shame Sanderson spends a year writing a book and I finish it in two days, but at least he's not George R. R. Martin!

The whole idea revolves around this society of humans, driven underground by an alien force. They live on a planet surrounded by a sphere of debris few can get through and attacked periodically by alien fighter planes and bombers that the humans must repel in order to survive. And here is this heroic little girl who dreams of becoming a pilot fighter despite her father being universally despised for being a coward and leaving the field of battle. Determined to clear her and her father's name, she enrolls in a school for cadet fighters and discovers she has what it takes to protect her friends and save humankind.

Sounds familiar? It should, every story lately seems to be about the same character. Is it an interesting and engaging character? Yes. Is the world weird and familiar enough to be enjoyed? Yes. If this is all you need, you will love the book. And of course, it's the first book in a series. I need a little more, though, and I feel that the twists were terribly predictable and there were holes everywhere in the world building. If you only focus on the characters, as the author did, you enjoy the book. But as soon as you try to imagine yourself there, things start to make little sense and whatever you would do, it would not be what the characters in the book do. Plus... that fighter! Deus Ex Machina much?

Bottom line: lovely book to read in a few days and feel you are a reader, but the story is as standard as they come and the only nice thing about it is that Sanderson wrote it.