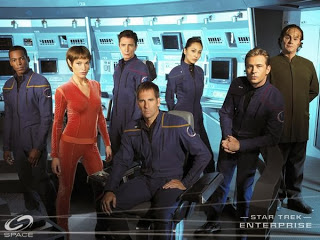 There are multiple problems with Star Trek Enterprise that doomed the show from the beginning. One, I am sad to say, is Scott Bakula, who I couldn't really see as a smart and resourceful captain till the very end of the show. Another reason was the name, making people confuse Star Trek Next Generation with this series.

Yet another, and perhaps the most important reason, were the producers who abused their station to steer the show into an impossible position: an Earth ship that is older than Kirk's starship stuck in the middle of epic conflicts through time and space. Even the writers complained that it should have remained a show about early exploration and abstain from the flamboyant temporal cold war or the Xindi saga.

You see, the show started very nicely, with the launch of the first warp 5 capable human starship. The Vulcans are still not sure whether the humans should attempt this, if they are ready for the big bad universe, while humans react like teenagers that have been forbidden something. We get to see the birth of technologies so important in the Star Trek universe: the transporter, newly invented and feared (maybe rightly so, considering the multitude of episodes that involve some accident with it in the other series); they use grapnel hooks to tow; they use explosive torpedoes at start and phaser cannons that they constantly upgrade; the replicators can only manufacture simple food and they have cooks on board for the rest. The interactions of the crew were also welcome, as all of them seemed perfect for the job.

That is why the first season was good, promising a very interesting show about the beginning of human exploration. Then they botched it, with the introduction of a silly and pointless race, the Suliban, who have a faction of people receiving instructions from the future, while other future people are trying to stop them interfering with the "proper" timeline. Basically they should have asked Jean Claude VanDamme to come. This almost destroyed the second season.

A strange decision, which I can't quite say was bad or good, was to make a season that is continuous, rather than the individual episodes of Star Trek until then. They introduced the Xindi, another intriguing concept, of a coalition of species: reptilian, arboreal, simian, insectoid and aquatic. This probably wreaked havoc with their budget, so only the humanoid species usually appear. Somehow they wanted to write about terrorism, since all Americans were being influenced by 9/11, therefore the theme appeared throughout season three and quite a few episodes in season 4. First were the Xindi, who (for no reason that I can see) tested a small variation of a weapon on Earth, in preparation for a bigger one that they were still constructing. Rather than compare it with the American atomic bombs, which were the natural analogy here, they, of course, compared it with the 9/11 attacks.

A strange patch of the universe where the laws of physics are warped by huge metal spheres that have weird effects is the stage for the entire season three, while Enterprise goes to find the Xindi and stop them from destroying Earth. I felt that it was an interesting season, the only bad bits being some inconsistencies of the overall story, rather than individual episodes.

Then they had a religious sect that threatened to blow themselves inside Enterprise unless Archer destroys their enemies. The caricatured religion and condescending jabs at Palestinians should have angered Muslims more than cartoons of Mohamed. Then there was the final act of terrorism, when a faction of xenophobic humans take over the Verteron array on Mars. That script was a mess, probably because it was the last episode before the show ending one. Too much terrorism for a show that defines the transition of humanity into a peaceful future.

And then there was T'Pol, played by the lovely Jolene Blalock. That was probably the problem: she was too damn sexy. They had, therefore, to make her have emotional issues, get into relationships with everybody, make regular trips in the decontamination chamber and rub her body with antiseptic cream and so on. It is a disgrace for women in Hollywood that her role was massacred by all of these preconceptions and easy ways to get audience attention. And she was a Vulcan, the precursor of Spock, for crying out loud!

In other words the powers that be exaggerated everything and allowed Archer to be moving through time or singlehandedly creating the federation, while trying to keep something for Kirk and Picard to do. I know it is difficult to make an enticing and modern prequel to series that you watched and loved as a kid, but randomly choosing themes and ideas to "fix" the show to be more something or another is not a solution. That is why, while it the newest series of Star Trek, it was also one of the worst.

The disappointment comes, for me, when I see several portions of the show actually being great. The MAKO concept, for example, highly trained military personnel that accompanied Enterprise in the Xindi story arch was a good thing and the interaction with the regular security personnel. The controversial decisions that Archer had to make to protect Earth lent more character depth than most of the moral cardboard crap that usually infests Star Trek. The old school technology made the voyages of the new starship bring smart new levels of excitement to the exploration of space. I liked the "In the Mirror Darkly" episode, which was not a crossover to an alternate universe, but only a show about the Enterprise of the alternate universe where there were all ambitious and evil. Even the start credits looked different, showing the glorious history of Earth conquests.

My conclusion, especially today, when the number of sci-fi shows explodes as the audience requires more and more fantasy, is that Star Trek represents the hope of humanity for a bright future and that allowing it to be defined by money hungry Hollywood production companies was ultimately a mistake, no matter how much soul the writers, directors and actors put into it. A space exploration show made by Europeans, something that would mirror Star Trek's United Federation of Planets in cinematography, bringing talent and ideas from Britain, Germany, France, Russia, etc, and borrowing from the sci-fi legacy of all. I would love to see that.