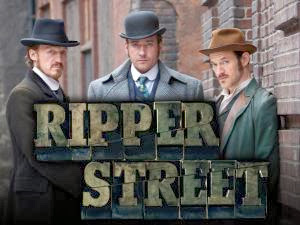 Ripper Street appeared at the same approximate moment with another similar series, Copper, also a historical series about policemen made by the BBC. The Ripper Street inspector is a man of justice, but also one that believes in the process of finding proof and sending the guilty to trial, which is relatively the same with the guy in Copper, who was a little more violent, but basically good stock. He employs (not unlike Copper) a doctor that is using scientific methods to determine the cause of death and other details that help in the investigation. His love life is in shambles as he mourns the death of his daughter, just like in Copper. A lot of the script also revolves around a female brothel owner, beset by financial troubles, but that ultimately proves ruthless. And also both series have ended abruptly, just before the second season's finale. This similarity can't be coincidental and it bothers me to no end that they used the same scheme for two different markets, just to see how it will work, with TV viewers as lab rats for their experiment.

But there are also differences. While the Five Points violent stage for Copper was more appropriate for the genre than East London after Jack the Ripper's case, the lead was never terribly charismatic. He seemed like a nice good looking Irish boy who was way over his head as a policeman. Instead, in Ripper Street Matthew Macfadyen uses his deep baritone voice and intimidating presence to portray perfectly the driven inspector Edmund Reid. Also, while the support cast for Copper did their job rather well, none seem to reach the height of theatrical performance that Jerome Flynn brings to Ripper Street while playing the violent but good willing police sergeant. And the final nail in the coffin for Copper is that most of the issues of the lead character are personal in nature, while the inspector in Ripper Street is tortured by his personal life failings, but is loyal to his job as a policeman.

Perhaps Ripper Street started with a promise of bringing light on the good of people in a hellish corner of the world, but in the end managed to do the opposite. In truth, the last scene of the series (and you might want to skip this slight spoiler if you plan to watch the series) is with the woman who loved the inspector turning in disgust when she sees him order his sergeant to kill a man in order to bring justice outside the system. In fact the last scene shows him betray all at once everything he stood for during the entire series. It's a slip up, of course, driven by desperation and something that would have probably been thoroughly explored in the third season. Alas, there is no third season to be had, for reasons of decreasing audience. It is difficult to pretend to be the best television producer in the world and then only care about audiences, like the assholes across the ocean, BBC!

The inconsistency in the show's quality can be blamed for the cancellation of the show, as well, but overall Ripper Street was entertaining and thought provoking. It could have been better, but not by much, I think. Good cast, good atmosphere of the old East End, some pretty compelling scripts. I believe it a shame to stop the show now. It was clearly better than Copper and that show had two seasons as well. Ripper Street deserved better, as well as all the viewers hooked on it.

RIPPER STREET fans: you may show your support for a return of this series here: http://www.change.org/en-GB/petitions/reverse-the-bbc-s-decision-to-cancel-ripper-street Over 33,800 fans from inside and outside of the UK have signed already -- tweet, e-mail, spread the word. We will #SaveRipperSt