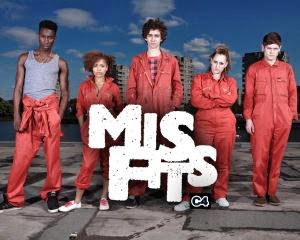 I've just finished the eighth episode of the fifth season of Misfits, the last in the series, as the show finally reached its end. I am convinced that most of the people reading this post don't really know what Misfits is and I mean to rectify that. Be warned, this is not the epitome of television and the last seasons were rather disappointing compared with the first few, but those few were pretty refreshing for a TV show.

Misfits is a British TV show about superheroes. Unlike American heroes, who are all beautiful and good and perfect, the first batch of Misfits superheroes is a bunch of losers on community service that get caught in a freak storm that gives them "powers". They use those powers in the most outrageous ways, completely out of control and with a tendency to think only of themselves and accidentally kill probation workers. Unfortunately it is the most consistent trend through the series, as actors change from season to season and the mood and quality of the show oscillates wildly.

My point, though, is that the show has a very nice premise and its worst problem was that instead of focusing on character development, they tried to ramp it up, adding more people with powers and gradually increasing the danger and weirdness of the situations in which they were involved until it just became ridiculous.

I don't know (or care) about ratings, but for me a nice show would have pitted these few guys against the real world, not a weird (and ultimately meaningless) version of itself where a lot of people have superpowers, but nobody notices. I repeat myself, but the idea of normal blokes and girls having superpowers and acting like normal people while they have them was a great one and the show creators should have followed it through. Too bad they didn't.

To wrap this out, I highly recommend to sci-fi fans watching the first two seasons of Misfits. Its... britishness... brings a refreshing perspective to an already overloaded and tired genre of the superhero and not getting exposed, even a little, to Misfits makes you miss out on a nice and unfortunately shortlived slice of the mythos.

I really wanted to give you a compilation of the best moment in Misfits, but apparently YouTube is infested by "Best funny moments of Nathan" which is the rude Irish pretty boy from the first season. Instead I leave you with the trailer for the series: