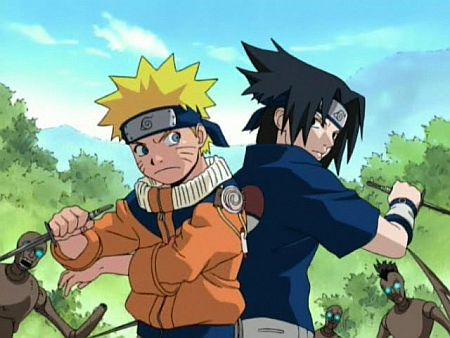 Well, imagine a lonely boy, without a family, learning magic in a special school and who's archenemy is a powerful yet evil wizard. He is always accompanied by his friends, a boy and a girl. The evil wizard likes snakes and manages to kill the headmaster of the magic school. No, it's not Harry Potter, it's Naruto!

It's like the Japanese liked Harry Potter, but thought they can do one better. They're not exactly magicians, but ninjas; Naruto Uzumaki, the main character, is a mix of both Harry and Ron, while boy number two, Sasuke Uchiha, is more like a small Snape. With a bit of a stretch, one could take the Naruto story and rip it off in a prequel to Harry Potter, with the parents as the characters :)

Anyway, long story short: the anime is children oriented, with all kind of soapy feelings, camaraderie and friendships, no gore, little blood, a bit of death, but "censored" where violence or tension is concerned. If you ignore the ridiculous simplicity of the characters, the story is pretty captivating and the "ninja science" fun. It more than makes up in quantity what it misses in quality. The first anime, Naruto, is concerned with the childhood of the characters and spans 220 episodes, while the ongoing Naruto: Shippūden with the adolescence and it is close to 50 episodes so far. There are 20 minutes episodes, if you count the 1.5 minutes presentation in, but don't worry, the fights last well into fourth episodes >:). Also, there are currently 4 Naruto movies: 3 for the first series and 1 for Shippūden.

Basically, if you cross Inuyasha with Harry Potter you get Naruto. I guess that any media industry, once it reaches a level of maturity, makes compromises in order to satisfy the greater audience. What Hollywood did for the US, the anime companies are doing for Japan, but in the end, the result is the same: dumbed down versions of what it could be.

Fortunately, animes are often based on manga publications and you can read Naruto well over the story arch in the anime, freely online.

This comment has been removed by a blog administrator.

This comment has been removed by a blog administrator.

Harry Potter is a crap tastic POS IMO. Naruto while having some semblance to DragonBall where fight scense go on forever, is much easier to bare since its done in 20-30 min. Small doses keep things more interesting IMO. I&#39;ve been watching the japanese version of the show (not the english crap they throw on CN) and that is a LOT better. Dattebayo does a great job in subbing the show with funny http://www.dattebayo.com/pr/62 (YHBT messages). :-) I&#39;d also recommend Bleach, Metalocalypse, Robot Chicken and Venture Brothers. IMO, they are all pretty good.

It ought to be, it&#39;s a bloody book that made millions to the writer. I wonder how famous and rich is Masashi Kishimoto. Anyway, a little more complexity in the plot and characters would not have hurt, that&#39;s my two cents.

I enjoyed watching the Naruto TV plays every week when I was still at campus. However, IMHO Harry Potter is a better story.