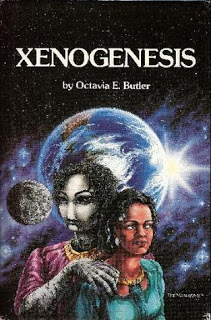 This book is NOT about vampires. For a long time I avoided reading it because the title so suggested some steamy vampire young adult crap. But no! The book is a hard sci-fi book about the end of humanity, written in a style that I can hardly imagine any man would be able to adopt. And that's a good thing.

Lilith's Brood is in fact a collection of three works (Dawn, Adulthood Rites, and Imago) by late writer Octavia E. Butler. That is why it is so damn long. Since she died, there won't be any more books in the series, so the "Xenogenesis #1-3" label is a bit misleading, just the name of an out of print collection that gathered the three stories together.

The story is about a species of aliens who decide to save the human race after a global war that had doomed it to extinction. The aliens are very interesting, but even more interesting is how the author surfs the edge of defining them as good or evil. Some of the things they do are benevolent and generous, others are, by human standards, insidious and evil. Imagine a benevolent Zerg species coming to Earth. Or a biological Borg with good intentions. Or an intelligent virus that rationalizes its actions as for the better good. It is difficult to keep reading as it pretty much describes the salvation of the human race as a centuries long rape and corruption process by a species that is much more advanced than us, but in very important ways, more animal than humans are. And we are almost helpless. Imagine you are a pet of omnipotent new-age vegans. It's something like that.

I was saying that only a woman could have written about it in this way because the focus is on survival and procreation, on protecting and avoiding death, on how the body feels rather than the mind. I do think that males were presented as either violent mindless rapey idiots or sensitive pacifist weak side characters. The arrogance of the aliens also has a strong vibe of "mama knows best", which explains why males were reduced to enraged murderous states. I mean, that's always the result of that "educational method". But the book is good enough to make you ignore that.

The bottom line is that this is a great book, one that is incredibly detailed and focused on characters, rather than technology or some story arch that has to end at some defined point. It made me think of so many things. I've once had this fantasy of writing a book about people being treated as pets. This is as close as I've read so far. Lilith's Brood made me reconsider the way I raise my dog! It also made me think of the nature of individuality, its benefits and perils, or the definition of humanity. Can you still be human when stripped of all dignity? As I said, while very very good, it is not easy to read. I was sometimes putting the book down and fantasizing on things I would have done if I were some character in the book.

Worth a read, that's for sure.