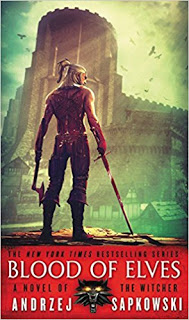 While Blood of Elves is the third work in Andrzej Sapkowski's Witcher series, it is the first actual book, the rest being collections of short stories. The style is the same, the characters the same. What changes is the scope of the story, the size of the described universe.

Is that a good thing? I can't say. While I applaud Sapkowski's attention to historical detail and the way the names are written or spelled in human or elven languages, the action still feels like I'm watching one of those Polish TV plays for children. A lot of dialogue, some exposition, no end to the moralizing stories about the environment and how politicians suck. So I am undecided whether this is a better way of treating The Witcher. However, I can say that the first book in the saga is nothing more than a chapter in a large story. A lot of set up, a lot of discussions, a lot of "almost there, but not quite" and then the book ends when you were starting to wonder what is going to happen. That makes the book incredibly disappointing as a stand alone story and, as I don't intend to read more of the Witcher, kind of a waste of time.

It is similar to one of those Hollywood movies that get split into two parts and it is never a good idea to watch the first part, then wait for a year to see the continuation. While I could read it really fast and there was nothing complex in it other than the political and geographical details, the story is almost nonexistent. I didn't like that at all. To add insult to misery, the book is about Ciri, the princess/witcher/witch, and very little about Geralt who appears mostly in memories and does very little in the story.

Bottom line: unless you are committed to read the entire Witcher series, don't bother reading this volume. It's not that it is badly written, it's that it does nothing but setting up the next books. It is an oversized chapter of a larger story and cannot be entertaining as a stand alone.