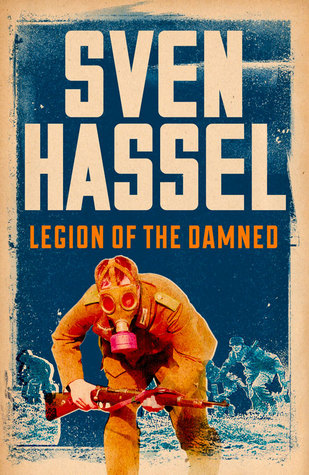 Oh, wow! I vaguely remember Sven Hassel as an author of war novels, written with irony and humor, because this is how I remember people referring to his books. I might have even read some of them, but I was a child and if I did I don't remember and clearly they made the wrong impression on me. Because reading Legion of the Damned, especially now, in times of war in Ukraine threatening to spill over, was an amazing experience. I think this is one of the most anti war books I know about and one of the best I've read. One thing is for sure: Vladimir Putin did not read this book.

Apparently Sven Hassel himself asked that this book be considered a documentary and in it there is a scene where a few German soldiers, unwillingly fighting for the Nazi regime, swear that whoever survives must write a book to expose to the world the horror and hell they went through. Well, he did write the book and thirteen others after. I don't know if I will have the courage to go through them all.

The book starts with Hassel being tried for desertion and, because of a woman sacrificing herself to say she seduced him into it, his life is "spared" and he is sent to a concentration camp. He survives the atrocities there only to be "pardoned" and sent to the war, as part of a battalion of convicts. More horror follows, only for him to be captured by the Russian army and send to a prison camp. Again, pain and pointless suffering ensues, but he survives and escapes, only to be sent to fight again in a war he and all of his comrades consider pointless, barbaric and inhumane. He suffers personal loss, he almost goes mad, but he has his friends and together they keep each other alive, mentally and physically. Then he is wounded and has to go through the horror of military hospital, where people are actually competent and kind, but death and suffering is inevitable. And after all of this, the ending might be the most heartbreaking of it all.

The traditional portrayal of hell is a place where devils take great pleasure torturing sinners in perpetuity. You read this book and you realize how childishly optimistic that vision is. Try to imagine something similar, but where devils are educated, kind and compassionate and punishing sinners is just as much a punishment for them, forced to do it and loathing the pointlessness and brutality of it all. Yet one cannot escape the system Satan implemented, himself too far removed to be witnessing the horror and pain he architected and immune to retribution.

Sven Hassel is a very good writer, perhaps because he is writing from his heart and it just pours out of him, and the subject is terrible and captivating at the same time. Yet the best part of the book, for me, was the feeling of joy in the little things, the things we take for granted and these damned people enjoyed every single one of them, whenever rarely afforded, to the fullest. Stripped of the complacent veneer of civilization that most humans live under, they lived every moment as if it were the best and last of them all. At no time is there an accusation or bitterness towards another people or group, or attempts to vilify anyone other than the bourgeois and generals that started and perpetuated war, from both sides, to appease unknowable urges that no ordinary person understands or supports.

Bottom line: a very strongly recommended book, one that I think is so apropos of these times, not only because it applies to war in general, but also because (from pure coincidence) the war locations described are places like Donetsk and Kharkiv (which is razed to the ground in the book, as the Germans retreat). The writing is both sweet and personal, educated and educational. It's a heart laid bare and printed into words. A must read.