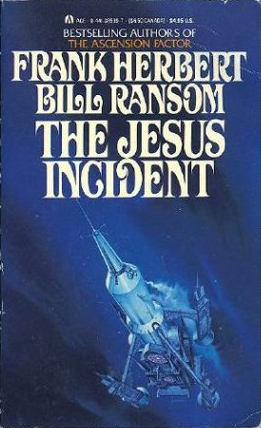 I already said while reviewing Destination: Void that I did not like the direction the story was going in the end, so it should be no surprise that I didn't like The Jesus Incident. A book filled with religious allegory and heavy philosophy about the definition of being human and the essence of religious worship and violence, it was so heavy that I had to make a lot of effort to finish it. I am going to go ahead and assume I didn't really understand it, but the important thing is that I didn't enjoy it. It was like all of the pretentious stuff from Dune got concentrated in Pandora and expanded upon by the contribution of Bill Ransom.

It's funny that as I was preparing to read the series again, my memories of it from my early teens were corrupted by my own desires, mixed up with Sid Meier's Alpha Centauri, muddled by all I have read since. I know feel betrayed, because I really liked the Pandora series when I was a child and now I wonder if I have gotten dumb with age or if I just didn't get what I was reading back then to the point that I hallucinated a whole new narrative and feel.

So in the previous book a crew of clones on a generation ship construct an artificial consciousness. Because it is fully aware, it is also God-like, controlling space, time and reality. From the book it's not clear how exactly it did it, but, thus equipped, Ship accomplishes its mission to bring its human clone cargo to a habitable planet in the Alpha Centauri system by switching/constructing different realities until a habitable planet exists there. This leads to many histories, many Earths, many types of humans. Or it could have just created the planet out of nothing, then ran some extra realities for fun, although this doesn't explain why the planet was so hostile to a typical human population and makes the existing lifeforms its direct invention and responsibility. Anyway, once there, Ship acts like an omnipotent god, interfering when it feels like it, demanding WorShip and declining to interfere when it suits it, by invoking vague snobby principles that it makes up on the spot or it derives from histories that it otherwise keeps hidden from the human population. Somehow Jesus is involved in all of this, although for the life of me I couldn't see what the connection was.

Bottom line: I almost hated this book. And it has so many of Herbert's obsessive ideas in it: religion, politics, ecology, evolution of humanity. As much as I respect Frank Herbert as a writer (so much that I am in the middle of rereading all of his books) I have to subjectively review this book alone, and for that I will probably rate it under average.