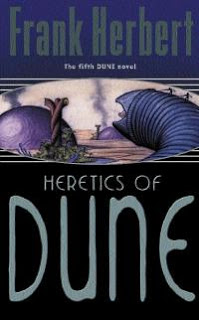 Indeed, the pattern holds: Frank Herbert creates a very beautiful book after the bore that was Emperor of Dune. One good book followed by a bland one and then again. Heretics of Dune has more action, more of the Bene Gesserit introspections and revelations and a bunch of diverse heroes, each with their own "powers". It's basically the superhero Dune book.

Well, I am obviously oversimplifying here, but the gist of it is right. The book is entertaining, with many characters to identify with and a compelling storyline. A new pattern emerges, though: after many pages of setting the stage and keeping the reader on the edge of the seat with anticipation, Herbert just quickly reveals his hand and finishes the game. It's like, for him, the mystery of the story was all that mattered and, once exposed, the book must end. That was a bit frustrating.

The book follows the exploits of yet another, better and improved, Duncan ghola, a weird desert girl who can command worms, a Tleilaxu master, many Bene Gesserit and the loyal Bashar Miles Teg. All in the face of terrible danger from "the Scattering", the many flavours of humans that spread out from the centre core after the death of Leto II and the ensuing chaos. The Tleilaxu are shown as bumbling buffoons, which somehow bothered me, because they are always shown as a powerful force, on par with the witches of Bene Gesserit, yet on every occasion they are outclassed, outsmarted and outmanoeuvred by them. Also the Zensunni Sufi angle was a bit of a stretch. The priesthood of Rakis was somewhat similar, and although it was normal for them to be idiots, they were presented as a powerful force as well, which made no sense. There were other things in the book that were not perfect, but one can easily overlook them.

Overall I loved the book, it was one of the most entertaining for me in the saga. More stretches of the imagination, though, and some felt a bit like special effects. Although the universe is the same with Dune, Heretics feels differently. In a way every Dune book was an extension of the original universe, trying as much as possible to not thread the same path as its predecessors, but this book really shifted the perspective of the reader towards a completely different awareness, while expanding some elements from the original Dune book, like the Bene Gesserit inner dialogue and deep perception and also hints of ecological laws, only this time applied to the entire Universe. At the end I resented that it had finished so quickly, which after all, is the hallmark of any good book.

I did not remember my own reaction to this book and now, after rereading both the book and my previous review, I am content to see that I have kind of the same feelings now. I do believe I maybe liked this book most of them all. I know that's kind of... ahem... heretical, but at the same time it was more complex, had many interesting characters, introduced many new ideas that were presented in an exciting and more technical way.

The main problem with Dune books so far is that they are a bit inconsistent, like crafted together from bits written slightly differently and not always clicking with each other. I mean, what the Bene Gesserit do is amazing, how they manipulate people via their words, their actions, their manufactured myths. Yet at the same time it stretches belief that no one caught on to how they are doing it. The Tleilaxu master knows that the sisters are doing something, he acknowledges as much, then falls pray to hope and then unjustified certainty that he was wrong. And then the book itself explains, in that certain preachy way, that people evolve to become immune to powers used against them, but it only affects the Honored Matres! And what about Ix? They are amazing engineers in one book, an afterthought in the other, even when they are the builders of space travel machines.

The same can be said about societies, technologies, natural habitats, science in general, which are very well crafted, but don't stand to scrutiny from the knowledge we now possess.

In that same vein, Heretics of Dune is both amazingly incredibly smart ( I LOVE how Herbert views people and groups and societies as a whole ) and carelessly inconsistent. But since it leans more towards the smart, I liked the book quite a bit, especially the first half.