I got this book as a recommendation and at first, I thought it wouldn't work. The scope was large, the characters many and the OCR was really bad so I had to guess some of the words from my text file. So I started reading other books. Left with only this on the PDA, I decided to attempt one more read. I don't regret that decision. 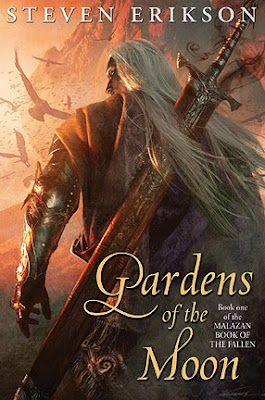 After a while I thought I've started another series of books from the middle or something. A lot of characters, with deep histories, placed in a vast historical context with lots of cool stuff like magic and wars and empires and gods and undead creatures and all that. But no, Gardens of the Moon is actually the first of ten books in the Malazan Book of the Fallen series by Steven Erikson. Wikipedia says: The Malazan world was co-created by Steven Erikson and Ian Cameron Esslemont in the early 1980s as a backdrop to their GURPS roleplaying campaign. In 2005 Esslemont began publishing his own series of five novels set in the same world, beginning with Night of Knives. Although Esslemont's books are published under a different series title - Novels of the Malazan Empire - Esslemont and Erikson collaborated on the storyline for the entire fifteen-book project and Esslemont's novels are considered as canonical and integral to the series as Erikson's own.

The plot is very complex, revolving around the Malazan empire, ruled by empress Laseen, who has just recently staged a coup d'etat and has overthrown and killed the emperor. The empire itself has only one goal, to bring all free cities under its rule, therefore a thick weave of scheming in order to juggle the armies that are partially still loyal to the fallen emperor, the many enemies of the empire, including vary powerful mages and the various high ranking officers who don't see with good eyes what is happening with the empire. And on top of this, Ascendants or Gods are meddling in every important aspect of life. The result is a soup of personal stories, epic battles, shrewd politics and lots of cloak and dagger stuff.

I have to say that I liked the effort a lot, including all the small details that are quite different from books with similar subjects. For example the magic comes from warrens, each a different flavour with influences that diminish and grow like tidal waves and which feed powerful beings whose purposes are never clear or directly expressed. Gods are equally likely to fight amongst themselves, meddle in the human affairs or purely possess some unlucky sod in order to manifest in the real world.

I will now end this entry in order to get the rest of the books in the saga. I highly recommend the book for all fans of fantasy and sci-fi alike.