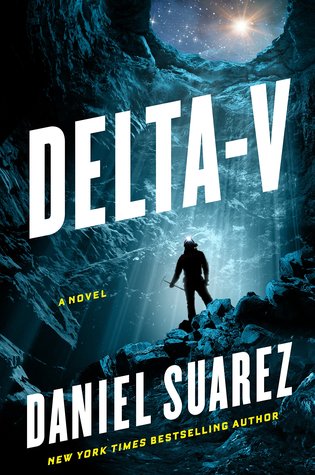 Daniel Suarez is a trailblazer: he takes technology in its infancy and creates stories about how it could be used today, given a little bit of determination and perhaps insanity. He is a competent writer, paying more attention to events and dialogue than to character development. This makes the books packed with ideas and information, but less lyrical, let's say. They also start brilliantly, with a new angle on a situation that could be happening today without big leaps in technology or stretches of imagination, yet kind of go over the edge towards the ending, become less plausible. Suarez's view of the state of the world and human nature in general is both optimistic and terribly dark.

Delta-V follows the same pattern, this time focusing on space mining, a subject that I am personally really interested in. What would happen if someone would ignore the bureaucracy and the ethical bog in which Earth is mired in and instead just push the boundaries, dare to do where others barely dare to dream? What if we would use the money we throw every day on wars and maintaining an artificial system of wealth and politics on something that lifts us all?

I liked the technical aspects of the book, but less the interactions between people and the way events unfolded. The story raises many interesting points, but fails to raise something more important: hope. The plot is akin to those high stakes James Bond chases, thrilling, but implausible, letting me feel like it would be crazy to even try. Delta-V leaves a bitter sweet taste after reading: to know what is possible with just a little commitment and to know that the world is poised to stop you at every point for the simple reason that it must justify its existence and protect its pecking order.

I liked Daemon more, but this one has a subject that is closer to my heart.