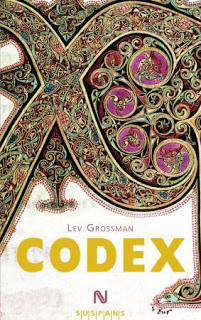 The book was nothing if not captivating, its pace much better than for the Magicians trilogy, but as in those books, it was really really difficult to empathize with any of the characters.

The story in Codex is about this investment banker who is having the first vacation in years, actually a small transition time between switching from his US job to a London based one. This makes him feel disconnected and somehow gets tangled in a project to arrange the library of a very wealthy family. The problem with this character is that he doesn't seem to chose anything. Things just happen to him, kind of like with Quentin in the Magicians, and he goes with them, only to get disappointed or surprised at the end. His friends, the people he randomly meets, even his adversaries appear at the exact time when the story requires them, making the book feel like a string of unlikely happenstances a rather aimless character just stumbles through.

There are some interesting parallels in the book, analogies between the beginning of romantic literature and the emergence of computer game fantasy, and probably the literary and historical details in the book hide some deeper meaning as well, but it's Lev Grossman's infuriatingly detached, almost dreamlike perspective that made me not care about it at all. Strangely, all the literary research going on in the book and the altered mood made me think of House of Leaves, only that was orders of magnitude weirder and better written.

As for the ending, I think I can safely say now that it's typical Grossman: the main character becomes aware of the delusions he was living under, both relating to his goals and the people around him. The veil gets lifted and the world goes back to the usual confusing pointless drag that it is for most of us. The author doesn't seem to care about the need of the reader for a happy ending, and I would normally applaud that, yet to use a depressingly realistic ending to a story that felt torn out of a night's dream seems a bit pointless to me.

Bottom line: I actually enjoyed it better than The Magicians, perhaps because it was shorter, better paced and I could relate to the main character a bit more. However, it is not something I would recommend to people. It felt too much like describing a man during a heatstroke, always dazed and confused, spinning wildly out of control of the things happening around him, a hapless victim of his immature feelings and a situation he is out of his depth in.