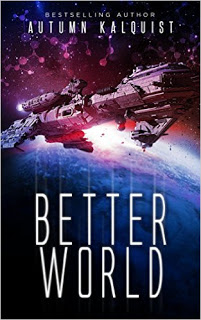 I've got this from a website where several self published authors shared free e-books for promotion purposes. I chose Better World because of its description: "The last humans spent centuries searching for a new Earth. Now they face extinction.
For three hundred years, arks have carried the last remnants of humanity through dark space. The ships are old, failing, and every colonist must do their duty to ensure the fleet’s survival." Pretty cool premise, if you ask me.

Now, Better World is not accidentally a free book. It is short, ends with a "to be continued" and has no other purpose than to pull the reader into Autumn Kalquist's Legacy Code series. To me it felt a bit amateurish, which is weird. I would have thought something that would pull your audience into your work should be better edited, if not better written.

The basic plot revolves around this 18 years old girl called Maeve, a low class citizen of the colony ships fleeing Earth to find a better world. The story starts with her trying to kill herself, while a dogooder boy who is obviously hot for her stops her at the last minute. I found it interesting that the heroine of the story starts off as weak, egotistical, scared, with low self esteem and living in a world where she is pretty much powerless. Everything that - if the book were written by a guy - would have prompted people to denounce his misogynistic view of the world. Yet every writing book worth mentioning affirms that the character has to begin as powerless and defective in order to evolve. And indeed, by the end of the book you find that Maeve realizes her own strength and courage when faced with true challenges, not just with teenage angst.

However, the scenes lacked power and, whenever something interesting happened, the author introduced new characters and new ideas instead of focusing on the potential of the current situation. Maeve wants to kill herself, a savior male is introduced. She rebels against authority, a younger more naive girl is introduced in order to suffer the consequences for her. The young girl gets hurt, a love interest - another girl - appears out of nowhere to take away focus from the shame and guilt. An "enforcer", a weak minded man drunk on his policing power, is making her life hell, she reminisces about her dead parents, killed by another enforcer's decision in the past. Every single time the plot was getting close to good, something was introduced that devastated the tension and the potential and gave the reader the impression that the story evolved as Kalquist wrote, with no clear idea of who her characters were or what the final shape of the plot will be.

And then there was the climax, the moment I was waiting for, when our hero gets stuck on an unforgiving planet with her torturer as her only ally... and they just walk a little to another group of people where she shows how good she is at fixing things. So much potential down the drain. Bottom line: the author comes off as a beginner in writing, but at least she is not pretending her work is the greatest and/or puts her friends to post positive reviews. Even with this short story I could see the wheels turning smoother and smoother as I went along, which probably means her writing will improve. Unfortunately, as standalone work, Better World is not more, not less than space pulp fiction, with no real impact behind the characters or the storyline.