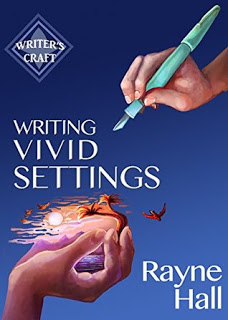 This book opened my eyes on multiple levels. First of all it went right through my Dunning–Kruger effect that made me hope that writing would be easy. Second, it showed me how to see the world as a writer, which is hugely valuable.

Writing Vivid Settings is also a value packed reference book. Rayne Hall doesn't go artificially raising your expectation level - you know the type: "in this book I will show you how to eliminate hunger and solve poverty, but before that...", he instead just goes right into it. In fact the transition to actual useful information was so abrupt that I found myself feeling grateful before I could even understand what the book was about. Then, when I did, it hit me even harder, because I understood not only what I was missing in my writing, but also what I was missing in my every day perception.

If I were to summarize the book, it is all about consciously describing from the point of view of your characters, in a way that makes the reader connect emotionally and subconsciously to the character and scene. In Hall's view there is no such thing as objective scenes, they are defined more than anything else by the character that observes them. The book advises to describe through the senses: smells, sounds, the lighting of the room, the way things feel to the touch, etc, then go towards what the character would most likely notice, based on their own personality and background, making sure to use similes so that the memory of the scene becomes anchored in the reader's mind in the same way it would in the mind of the observer in the book. Yes, it does sound weird, doesn't it? Make the reader feel as the person who doesn't really exist except in the writer's head.

Each chapter in the book explains elements on how to describe the surroundings, when to use them, how to use them, what to avoid, professional examples from other books and some assignments to make you get right to it. And there is where it becomes interesting. When I told my wife about it, she immediately recognized exercises for "grounding", something that is used in mindfulness and gestalt psychology. As an example: describe the smells in the room, then the way the light enters it and how it changes the colors, then some background sounds, all by using verbs that are very specific and indicative of the character's mood and similes that would be indicative of the character's background. I kind of mixed several chapters in this, so you can get the point. Well, when is the last time you ever did something like that in your life? When were you last conscious of the sounds and smells around you and what they evoke? When did you last compare the light in a place to a living thing, with a mind of its own, just because you can? It is all about bringing all those vague perceptions to a form that can be communicated, to others and to yourself.

That is the trick to good writing, for sure, but also a way of observing the world around you. Suddenly, I felt like a little child that doesn't see the world around because he doesn't know how. I found myself going places and trying to describe the scene as instructed in the book - many of the assignments in it suggest doing right that, anyway - and it was hard. It was more than hard, it felt impossible. Like living your life on a psychologist's bench, always asking you "what does that mean?" and "how does it make you feel?" and "what will that lead to?". But how alive the world seemed while doing that! Aware of my own senses, feelings and their roots, I could suddenly understand people who enjoy life for its own sake. The book's description is "Do you want your readers to feel like they're really there—in the place where the story happens?" After reading it, it seemed that I was never there in the first place.

It probably doesn't say things differently from other writing books, but it certainly opened my eyes. I also absolutely loved how it didn't start with marketing bullshit and got right into it, with theory, examples and exercises. It can be used as a reference, before and after writing, since it has exercises on improving already existing work. I think this is a great book.