I've finally finished the book WPF in Action with Visual Studio 2008 by Arlen Feldman and Maxx Daymon. Simply put, it was a great book. Most of the programming books focus too much on structure, resulting in very comprehensive information, but giving one little in the way of actual work. WPF in Action is describing features while using them in a few applications that are built almost entirely out of code printed in the book. I think this is the second book any beginner in WPF should read, the first being one of those boring comprehensive ones :) 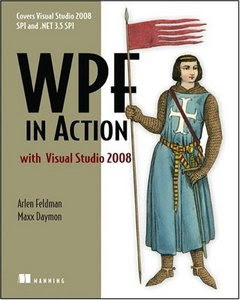 The book goes from a brief history of Windows Forms and WPF to Hello World in part one, then to describing layouts, styles, triggers, events and animations in the second part. The third goes to create a wiki application using commands and binding, datatemplates, converters, triggers, validation, then custom controls and drawing (including 3D!). I am a big fan of the MVVM pattern, but I liked that in this book, while it got described, it didn't suffocate the other topics, getting only a small subchapter in the binding section. The fourth part explains navigation, XBAP, goes briefly through ClickOnce and Silverlight, then has a large chapter about printing (too large, I believe). The book finishes with transition effects, interoperability with Windows Forms and threading.

All in all I think it was a very nice read. The authors clearly have a lot of experience and are quite qualified to talk not only about the features in WPF, but also the gotchas and some of the problematic implementations or even bugs. The fourth part of the book was a bit of a bore, though. After a pretty heavy 3D drawing ending of part three, I get to read a whole lot about really boring stuff like printing. I am sure that when need arises, though, this is the first book I will open to see what they did.

Bottom line: First three chapters are a must read. Maybe skip the 3D drawing part the the end of part three. The fourth is optional. The authors themselves said that they intended to write something that could be used as a reference, and I think they succeeded. So read the table of contents and see which parts of WPF you are really interested in in those optional parts.

The WPF in Action with Visual Studio 2008 link goes to the publishers site, where you can download the source code and even read some sample chapters.