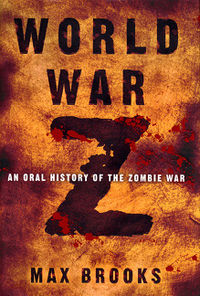 Having seen the film, I decided to read the book. Now I can understand why so many people said the film was not like the movie, but also why the film itself seemed so episodic. In a nutshell, World War Z is a collection of more than 50 interviews of witness accounts about a fictional war against the zombies. This makes the only connections between the book and the film be the zombies and the episodic nature of it. In rest the stories are different, the way zombies behave, the take on how humans react and of course the shitty ending.

Now, about the book... It was easy to read, mostly because I could just take the PDA in my hand and read one of those mini stories in 10 minutes and then do whatever I wanted to do. Some of them were really great, too, but after reading the book I think I can safely say that it wasn't about zombies at all. Instead it was about the way people live now and the war was just a prop to make us see things clearly from a different perspective. Of course, some things never change: the great American spirit, the Russian brutality, the narrowmindedness of Asians and so many other clichés. Not that they are not believable, but it so shows that the author is American, even when he makes fun of his own country's flaws. Anyway, I encourage you to see the book as social commentary rather than a zombie or a horror book. That is also because the threat of "regular" zombies - you know, slow and dumb - can't really be that scary. So there are a lot of technical flaws with the zombies in the book. The situations described show the difficulty mainly in fighting millions of city dwellers now turned zombies and the war of attrition that the zombies were actually enabling, since they destroyed everything in their path, yet needed no food or supplies. Also a lot of the stories have this "I don't know why zombies don't die from bombs, water pressure, frosting, etc. I am just a dumb whatever telling a story". At some point it got a little annoying.

The bottom line is that I enjoyed a lot more the personal descriptions of how people live in other countries than the zombies, stories about them or the rather weak speculations on how people would react to their attack. The book was nicely written, but clearly amateurish; it lacked the depth of seasoned writers and had too many "props", like you see in screenplays. No wonder: Max Brooks is the son of Mel Brooks, he lived in the world of movies his entire life and this is only his second book.