My blog becomes boring as I fly through the Wheel of Time series and it seems this is all I write about. The truth is that the feeling that started creeping in from books four or five, the "let's get it over with" feeling, has become stronger and undeniable. I don't want to stop reading the series, but I want to finish it soon, so I get to something that is truly interesting. 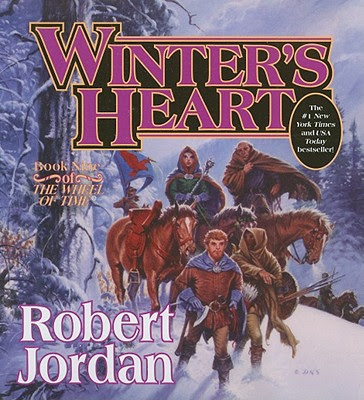 Winter's Heart is somewhat fractured. It continues where Path of Daggers left it and again it ends without a definite book boundary, just like a simple episode from a series. There is a rather important situation right at the end of the book, but it is underwritten, leaking important knowledge matter-of-factly and barely describing what should have been glorious fights with the One Power.

My impressions: Mat's storyline becomes intriguing, after a bit of utter boredom. Perin's story becomes ridiculous, with choices no sane man would make, not to mention women, and the obnoxious Aiel again getting a foothold in the plot. It has reached a point for me where any mention of Aiel just rubs me the wrong way. Rand is trying to make his enemies unsure of his plans, therefore he acts erratically, but that means he doesn't really do anything, until the end of the book. The girls are all doing whatever they feel like it, without coordinating with the boys, but still assuming they don't need to. The worst are the "evil ones" which seem to have fallen asleep. Fain tries to kill Rand, but not when he has him alone somewhere, only when he can "lure" him into a trap, together with all his friends.

Some ideas do come up. One is that Shai'tan is nothing more than a force of evil, not unlike Sauron, nothing corporeal or even conscious. All the evil in the book is done by people "doing the Great Lord's work" and their minions. The idea that the Dark One is imprisoned and that is why his actions make no sense is moot. Also, it seems that the Chosen are being reincarnated almost as soon as they die, only in other bodies. They call themselves differently, for some reason, but they possess the power and knowledge they had before death. They fear death, also, which make no sense at all. Robert Jordan's talent here is to make the evil side act stupidly, but without letting the reader feel so, and he manages it pretty well. Too bad I am more of a rational person.

I really like the idea that the One Power (which was always two, one male, one female) has an evil equivalent (the True Power - who comes up with these names?). Being of a Western origin, it is likely Robert Jordan will feel the need to unite all of these powers under "one God", so interesting interactions and hybrids might appear later. A tantalizing hint that Moiraine might be alive is also presented, when a reincarnation of Lanfear appears. Now that more annoying characters have popped up, I almost miss her, not to mention Lanfear herself, which is my favourite evil insane female character in the book :)