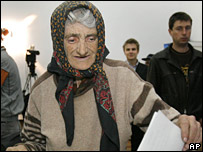 BBC News released an article today, regarding the referendum in Romania about the decision to oust or not to oust the president, Traian Basescu. The picture in the article was very representative and it is the same in this post. That's why I feel robbed! I go vote and I see that this kind of people stole the vote from under me.

But I went to vote anyway. It is my first time (political deflowering?), and I knew it was for nothing just as well as I knew it the times I didn't go to vote, the idea being that even if I will be (again) in the minority that no one cares about, Basescu will look at the numbers and see me there! He will see that some of the people don't really like what he does and how he does it. Maybe this will stop him from going all Elvis on us.

Anyway, to people who are not employed in the budgetary system, this ousting of the president thing was like a good opportunity to watch something interesting on TV for a change. Nothing changed when he got suspended by the Parliament and nothing really changes today. Maybe that will make people see soon enough that we don't need a hero, just a good system.

However, I still fell pissed off because I always get ignored in the votes because of the "people" in the picture. Geez! Use head, don't bang!

Well, I think you (and me also) can begin &quot;charitising&quot; by understanding - not falling prey - to our repulsion reactions.